Oh Patriots: Gronk not at practice, Belichick black eye and an Overdose? 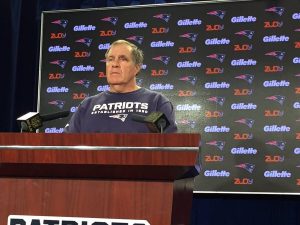 Coach B had a nice Black and Blue eye, what is going on?

What is happening in Foxboro. Today was a wild day.  According to multiple reports, Chandler Jones may have overdosed on pills, Rob Gronkowski was not at practice and Bill Belichick has a black and blue eye.

Patriots defensive end Chandler Jones was rushed to Norwood Hospital Sunday morning after he showed up at the Foxboro Police Department with a medical emergency, police dispatch records show.

But police officials won’t say what the emergency was and the police chief confirmed information was deleted from dispatch records according to the Boston Herald.

Dispatch records show Jones arrived at the police station at 7:42 a.m. with a medical emergency and was evaluated by fire and EMS officials before being transported to Norwood Hospital just after 8 a.m.

According to multiple police sources Chandler Jones “OD’d on pills” Saturday night and was taken in an ambulance to Norwood Hospital.

Patriots tight end Rob Gronkowski was the only player missing from today’s practice at Gillette Stadium.

It’s unclear why Gronkowski wasn’t present for the session, which was held in full pads. Gronkowski’s knee hasn’t been on an injury report since Week 14, and he was present for yesterday’s workout.

What is going on?