Tennessee Titans have hired Mike Mularkey as their next head coach 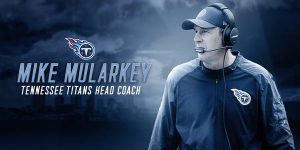 Titans have hired Mike Mularkey as their newest head coach

The Tennessee Titans are retaining Mike Mularkey as their head coach. According to the team website, Mike was the right man for the job.

“The vision Mike presented for our football team during this search as well as the character, integrity, and leadership skills he displayed during the last two months of the season makes him the right coach for the Tennessee Titans,” said Titans Controlling Owner and Co-Chairman of the Board of Directors Amy Adams Strunk.  “Mike is a quality coach and an outstanding person who will help us build this team the right way. He has experience as a head coach and a track record for developing young quarterbacks and dynamic offenses, and he also brings continuity for our franchise quarterback. We understand this may take time as we rebuild the roster and bring in new coaches for Mike’s staff, but we believe he has the experience and expertise to build a consistent winner.”

“I am honored to be named the head coach of the Titans and I want to thank Amy, Kenneth, Steve and Jon for this opportunity,” said Mularkey. “I am going to give all that I have to make this team successful and make our city and fans proud. The last two months of the season were extremely valuable to understand our personnel and instill some of our values and standard of play, so we won’t be starting from scratch. With that as a basis, we will now be installing some new systems and bringing in new coaches and players to build on what we have started.  There is plenty of work to be done until we reach our goal, but myself, the coaches and the players are going to work tirelessly to get us there.”