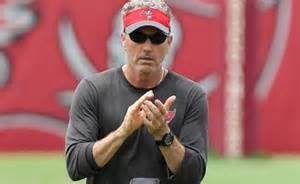 Buccaneers have hired Dirk Koetter as their next head coach

The Tampa Bay Buccaneers will hire Dirk Koetter as their next head coach, according to Adam Schefter and Rick Stroud. The reporters claim the Bucs and Koetter are finalizing a deal.

Buccaneers and OC Dirk Koetter now closing in on deal to make him Tampa’s HC, per league source. Done shortly.

The Bucs fired Lovie Smith last Wednesday at 10 p.m. in what was a surprise move, at least in terms of timing. The Bucs interviewed two other candidates in Sean McDermott and Harold Goodwin, Koetter continued to be the front-runner and has now been hired.