Is the Saints owner’s wife a racist? Lawsuit has been filed against the billionaire 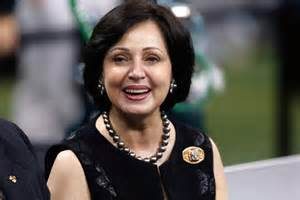 Is Gayle Benson a racist?

There has been a lawsuit filed against Tom Benson’s wife Gayle Benson by an assistant who claims he endured racist comments from the billionaire’s wife, according to a lawsuit.

Rodney Henry’s suit, posted in full by The Times-Picayune reports, describes Tom Benson as defending him against racist attacks from Gayle Benson. This excerpt is from the lawsuit:

A few days later, Mrs. Benson went into Mr. Henry’s office, pointed at him in an aggressive manner, and stated “whatever goes on in this office stays in this office because I think you are the one telling Rita.”

Within earshot of Mr. Henry, Mrs. Benson then stated to one of the Saints’ Executive Assistants “I hate that black son of a ***** and am going to get rid of him.”

This is another part

The next morning, Mr. Benson was outraged that Mr. Henry was being required to stay in an inferior room and, in front of Mrs. Benson, told Mr. Henry to move to a full-size room on the second floor in the main hallway. Mrs. Benson then told Mr. Benson that the small room with no air conditioning “was perfect” for Mr. Henry. As soon as Mr. Benson left the room, Mrs. Benson looked at Mr. Henry and screamed “I hate you.” Mr. Henry did not respond.