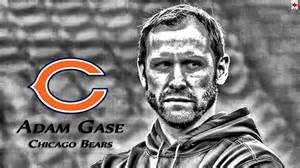 The Dolphins are finalizing a deal to hire Adam Gase as its next coach, according to Adam Schefter.  Gase, the 37-year-old offensive coordinator of the Bears, will become the Dolphins ninth full-time head coach. Despite not playing college or pro football, Gase has been shooting up the ranks. He began his career as a graduate assistant under Nick Saban at LSU and worked his way up to scouting assistant with the Lions. He was hired as quarterbacks coach of the Lions at 29. He was offensive coordinator of the Broncos record-setting offense in 2013 and 2014.

In his first season under Gase, Chicago quarterback Jay Cutler posted a career-best 92.3 quarterback rating. However, the Bears were only 22nd of 32 teams in scoring this year at 21 points per game.

According to Ian Rapoport the deal is just about done:

“The hottest coaching candidate is about to be off the board,” Rapoport told NFL Network’s GameDay First. “And Mike Tannenbaum, the new football czar for the Miami Dolphins appears to have brought him home. I’m told that (Gase) and the Dolphins have made significant progress toward him becoming their new head coach. Barring any snags, that deal should be official today.”