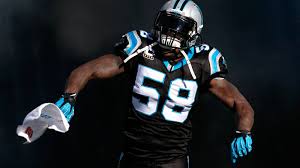 Thomas Davis may have a broken arm, but he is playing in the Super Bowl

Carolina Panthers linebacker Thomas Davis has been amazing for his defense this year. The former safety/linebacker from Georgia has been a mainstay in the defense since entering the league, and the leader of the defense will not let a broken arm slow him down.

According to multiple reports, Davis broke his arm when he tried to tackle Darren Fells who attempted to jump over him. Davis may be injured, but he claims it will not slow him down.

“I’ve got two weeks to heal up,” Davis said in the victorious locker room, carefully holding his right arm up with his left hand as he spoke. “Come on, you know me. I ain’t missing the Super Bowl, you know that.”

When asked if surgery would be required, he shrugged, but insisted he wasn’t bypassing  a chance to play in his first Super Bowl.

Davis’s wife posted a photo of the two of them on Instagram this morning, showing the Panthers linebacker in a surgical cap. He is likely getting his arm worked on, to install a plate to protect the broken bone. If anyone can do it Davis can. He has overcome three ACL repairs.