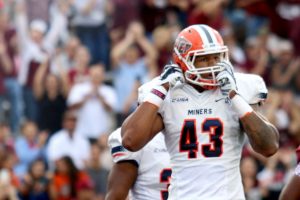 The coolest thing I’ve done off the field is getting to coach young kids who are in group homes. The group where the kids are is known as Child Crisis.

The hardest college class I took was Psychology.

My role model would have to be my pop. He showed me the true definition of what hard work is.

Growing up I played basketball.

At my position, my speed separates me from the others, as well as my length (arms and legs).

When watching film, I’m looking for key things an O lineman might give away (run or pass). I also look for certain motions or back tilts.

The toughest players I’ve faced was Driphus Jackson from Rice (high school and college) and Kenneth Dixon from La tech.

I would compare myself to Robert Quinn or Bruce Irvin. They are two guys that I try and match my play like because of the same built. I also love how hard Robert Quinn plays on the backside of plays. 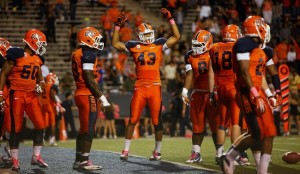 The biggest obstacle in my life would have to be school. Growing up I always had a struggle with catching on to certain courses and I felt as if I learned things at a slow pace. I was able to get through that and finished college with my bachelors this past December.

I wouldn’t say I have any pre game rituals. I like to listen to music, pray to my great grandmother, then walk the field before pregame.

My biggest strengths would have to be my speed, my long arms and my will to learn. I love being able to learn in the film room and become a student of the game.

My weaknesses would have to be my length as well. I find it a struggle to play low when playing the run, as well as when I pass rush.

“This guy is going to play lights out every play! If the ball is 80 yards down the field, he won’t stop until he makes that tackle! He has a lot of power behind his speed, despite being a little underweight at his position!”

Growing up I was a Oakland Raiders fan. My favorite player growing up was Donovan McNabb because I really wanted to play quarterback.

If I could choose three people to have dinner with, it would be my late great grandmother, The Rock, and JJ Watt.

The first big item I would buy once I’m in the NFL would have to be a nice home.