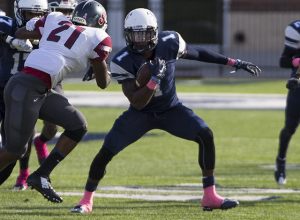 Trevon Hartfield is a long corner with good hand and speed

The coolest thing I ever did giving back was at the Live United Texarkana Bowl when we went and helped out at the elementary school by playing football with the students.

The hardest college class I ever had to take was definitely Managerial Accounting.

My role models are my parents, they’ve raised me into the man I am today.

I played basketball, baseball and also ran track growing up.

I played quarterback and wide receiver before making cornerback my primary position.

My size and physicality along with my speed separates me from other cornerbacks.

When I’m breaking down film I watch for tendencies that they receivers tend to give away on breaks and stems.

Toughest player I ever faced was Sedrick Johnson transfer from Iowa State to Southern Nazarene University, he was just a complete athlete. 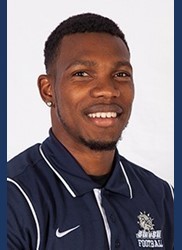 If I compared myself to one player it would be Patrick Peterson bc I play very instinctively and off a lot of athleticism.

The biggest obstacle I had to overcome growing up would probably be being one of the smaller players in my younger years of high school and having to work extra hard to get bigger, faster and stronger to catch up to all the other players.

I do not have any pre game rituals.

My biggest strength is being a bigger cornerback along with having good speed.

My biggest weakness is being a bigger cornerback and not having as good of hips as a smaller cornerback.

I am a player that has all attributes to play at the professional level, I train every day to be the best me and to beat the best that is put in front of me.

Three people I would have dinner with would be my son, mother and father.

The first big thing I will buy when I’m in the NFL will be my mother a car.