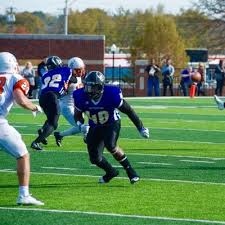 Traivonne Brown is a special player. He can play all over the field, from Special Teams to most roles on offense to linebacker

Was able to help clean up the boys and girls club over by the school with my teammates. Then after, had the chance to play some games with the kids

I would have to say both my mother Renethia Hall and father Lester Brown. They had their hands full with 6 boys, 1 girl and still were able to get their jobs done and provide for the family.

I ran track & field and I also did wrestling

Multiple positions. Played Both Free and strong Safety in pop warner and also QB my last season on my fathers team. Then at Southeastern I played middle linebacker, Sam backer, and special teams.

Not only can I run, but I can also catch the back coming out the backfield or even being able to line up at the receiver position and run routes

I look for where the blitzes are coming from and how I will have to break down the right way to stop the defender from getting to the QB and also when I’m running the ball I like to see how many players or in the middle of the field or on the outside, that’s going to tell me if I need to bounce it up the middle or keep to the outside.

Levine Toilolo. He also played DE in high school. It was kind of hard trying to maintain a 6’8 guy coming in hard off the edge.

Marshawn Lynch Because he doesn’t go down on first contact and neither do I. I may not be as big as he is but my running style I believe is just like his.

The biggest obstacle I had to overcome I would have to say was finding a school to play my last two season. After junior college I went to go walk on over at Oklahoma state, things didn’t go the way I planned for them to go due to problems with my classes back home at the junior college. I went back home to finish the courses I was missing and was going to try to attend another big school university but was turned down because of my NCAA clock. My other options were to go down to a D2 or lower. It was hard to find a school who wanted me because I was out for a year and didn’t have much film besides my high school highlight tape and a few clips from junior college. It was getting close to teams about to start their camps, so I thought it was going to be the end for me but then I received a call from Southeastern where I was given a chance to finish my last two seasons.

I just listen to music and walk around the locker room

Hard worker with a lot of talent.

Just my grandmother, she died at a young age and I would just like the chance to spend more time with her. Also I would like to get that birthday dinner with her that we had planned before she passed.

I’ll buy my parents a house.