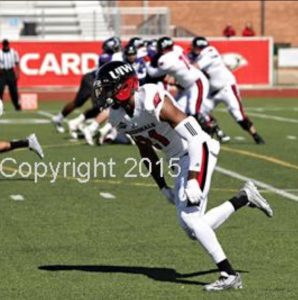 University of  The Incarnate Word

Went and visited kids at an Elementary School sat and ate lunch with them and  also spoke to them about the golden rule and respect, the smiles on their faces and to be able to give them something to talk about when they got home to their parents was pretty cool.

My mother, Stephanie Johnson. Just the sacrifices that she has made for me and my sister, her faith and belief in God and a Multitude of other things, I could probably go all day, But she motivates me and keeps me going. 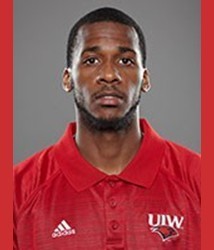 My first position was Quarterback, but I also played DB.

My speed and ability to get open and my off the line releases.

I look at a DB’s tendencies, their technique. I look how aggressive they are in man press I also look at how well they cover routes.

My boy Jeremy Massey, still haven’t went against anyone that’s made me work harder than him.

Mike Wallace, We both are about the same size and his ability to separate and out run defenders is similar.

I tore my ACL in 2011 during the start of my college journey, A lot of people told me I should quit and pursue something else but I stayed encouraged, stayed prayed up, worked hard to recover and allowed God to work and do what he does.

I talk to god, and listen to music

Trying to get scouts to not over look me because I went to a small school and to realize I am just as good as guys that play at those “bigger” schools they were just put in better situations.

My Ability to beat guys deep, and my releases.

I would like to be more consistent in attacking the football. Sometimes I do and sometimes I don’t and I just want to make that an every time thing.

I play fast and physical, I’m always on time to meetings, workouts, practice or whatever the coaches ask us to do I’m there. I’m coachable and I have great character on and off the field, you don’t have to worry about me getting in any type of trouble. I’m just a stand up guy that wants to play football and take care of his family.

I’ll probably pay off these loans I built up from playing Junior college ball. Other than that, a nice home for my mother.