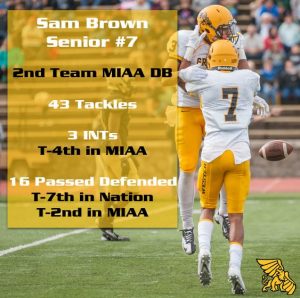 Defensive Back Sam Brown is a feisty defensive back, who was a pass break up machine his senior year

Just recently, I reached out to a guidance counselor from a local school to bring clothes and shoes for unfortunate kids at the school and I also spoke with kids from troubling homes and backgrounds about staying focused, determined, and ambitious and they will make it as far as they want to no matter what’s formed against them.

My big brother Donald, because he made sacrifices and made decision for the better of my wellbeing and not his, he showed me the true meaning of family.

Yes varsity basketball in high school and baseball when I was younger.

In college I started off as a safety.

My IQ of the game and the way I use my length and speed to cover ground.

I look for tendencies, the ability of a wide receiver to get off the press or how he runs his routes when its off man. Also I bad technique in his route running ability that will give away a break or something of that nature in his route.

I can’t remember his name but he played for Fort Hayes in 2014 he was number 4, He was pretty good. 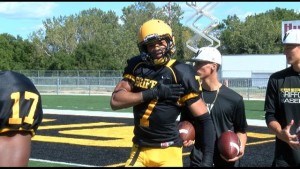 At the age of twelve I lived in Virginia and my Dad and his Girlfriend were addicts and my 2 brothers and I basically had to fend for ourselves. Sometimes we would get kicked out the house and had to sleep in the car it was rough, but we took our lumps and made it through.

Pray, listen to music, and relax.

My mobility and athleticism. Those two combined allow me to do things with my body and be in areas most can’t be in.

My weight I’m an aggressive player but with some added weight I would be much more effective.

100% effort, does the job effectively, and team first, myself second.

Growing up I would have to say Vince Young.

My mother, my 4th great grandpa, and Malcolm X