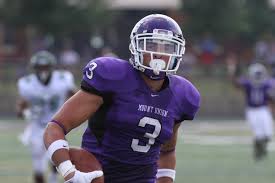 Mount Union wide out Roman Namdar is a stud with great hands. He was a touchdown machine at Mount Union

This past season some of my teammates and I took part in a program called Raider Buddies where we would visit local elementary schools every Friday and hang out with the first and second graders throughout the day.

My dad is definitely my role model.  Seeing how hard he works and how much he has sacrificed in order to better off my sister and I is very inspiring.

I played baseball and basketball when I was young. In high school I ran track.

I played quarterback up until my junior year here at Mount Union.

What separates me from others is my knowledge of the game. Playing quarterback so long has helped me understand the offense as a whole and it allows me to interpret my routes differently than others. 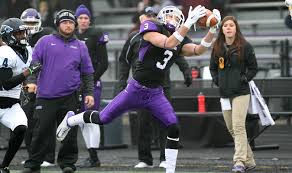 I would compare myself to Jordy Nelson.  We both are big play wide outs that also come up with key possession catches. Jordy also was a 400 runner in track just like myself.

The biggest obstacle I’ve overcome is missing most of my senior year of high school to an ankle injury. I only played a handful of games which was a huge letdown for me personally.  After the season my dad sent my JV film to a bunch of schools and luckily Mount Union was interested which is how I miraculously landed here.

I have a bunch of pre-game rituals but the most important one is that I say the same prayer before every game.

My biggest strength I would say is my speed and knowledge of the game.

My biggest weakness would probably be my lack of experience at the position.  I’ve only played receiver for two seasons.

I am a very smart player that is willing to do whatever it takes to make it on a team. There are not many players that have the same love and passion for the game as I do.

My favorite player growing up was Marion Barber III and I love the Dallas Cowboys.

My first big item will be paying off my student loans.