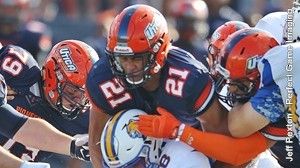 My Parents because they both have traits that have made me who I am now and I always look to them for support and guidance when I need them. They are the two people I know will never leave my side.

I played soccer up until high school and at the same time I bowled as well. I did track in high school to get my speed and coordination in better shape for football.

In high school I played TE/WR as well as playing DE. In college I stood up and played 3-Tech in certain packages.

My knowledge of what is going on around me and how everyone on the defense fits up to what the offense is running. My speed, length and hand also make me hard to block, I used them every play to beat my opponent.

I look at the tackles specifically, but I also look at the whole offensive line as well. I look at the tight end if the team is big on him staying in and blocking. I look at footwork as well as where they place their hands when they punch. I look to see if they block man up or if they are a slide team as well. I look for little keys in their stances that can either tell me if it’s a run or a pass. I also look at if the running backs are cutters in pass protection or if they are straight up blockers. 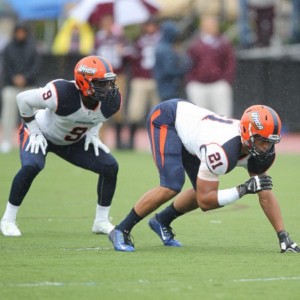 Cameron Wake because he is a speed guy who has a great get off, a dangerous pass rusher and needs to be accounted for every play.

My freshmen year my lung collapsed and it opened my eyes to how I almost lost one of the things I love, being football, from then on I took the game and preparing for the game more seriously. I gained weight and muscle so it wouldn’t happen again and so I could be successful at my craft.

I listen to a lot of older 50-Cent music and some Meek Mill, the more aggressive rapping style gets me pumped up.

By going with me you’re picking someone who won’t let anything on or off the field stop him from producing for the team. I’m the type of player to give my mind, body and soul for the better of the team. I’m the type of person who looks at the bigger picture of a situation. I’m pretty light compared to other guys at my position but gaining the weight isn’t a problem if that is what you want me to do. I am a utility player.

Adrian Peterson and the Minnesota Vikings

My parents a house