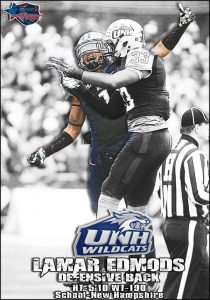 Definitely being a part of youth and high school football camps, and being able to pass on my knowledge of the game to younger kids that look up to you.

I don’t have one.

In high school I played Quarterback and Free Safety.

I would say my physicality separates me from most defensive backs, I play very physical and love hitting.

When I am breaking down film I particularly look at wide receivers route running and clues that may give away a certain route. I also, analyze quarterback progressions and who their favorite receivers are.

RJ Harris, who I was able to play against every day in practice.

Earl Thomas, because he is roughly the same size as men and a very physical safety like myself.

The biggest obstacle I faced in my life was proving that I had the ability to play football at a Division I program. Coming out of high school I had zero offers from any Division I or II schools, every school told me I was not big enough or not sure about my ability. I chose to walk-on at UNH, and I told myself I would prove the world wrong. I ended up coming in my freshman year and climbed my way up the depth chart, and earned a scholarship after my first year.

Every game before team warm-ups I put my headphones on, take a lap around the field, say a prayer in the back of the end zone, and then get my own stretch in.

My biggest strength would most definitely be my versatility to play every defensive back position, whether Cornerback, Safety, or Nickel, and being a tremendous special teams player. 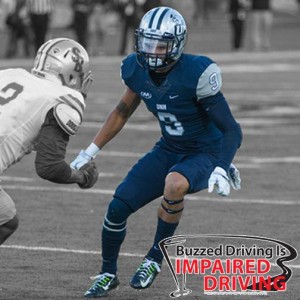 My biggest weakness would probably be my size, seeing that most teams look for bigger defensive back now a days.

I would tell them that they would be receiving a player who is going to go out and give it everything he has every chance he gets. Since I was younger I have be doubted on, so I have something to prove and that is the way I play when I am given the opportunity.

My favorite player growing up by far was Brian Dawkins, and he is the reason why I am a Philadelphia Eagles fan.

The first thing I will buy will be a car and then save the rest.