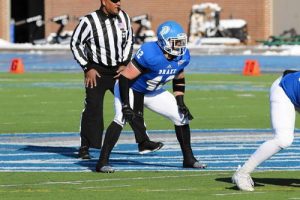 John Hugunin is a fierce competitor with an never quit battery. The guy is relentless and was a dog for Drake in the middle of the field

I was a community service captain at Drake, so I’ve done tons of awesome things in the community.  My favorite was probably working with Special Olympics Iowa to develop a football event and work with the kids on different football skills.  It was so cool to see their faces light up when they learned something during the event.

General Physics – not even close. It was also the last class I needed to pass to graduate. Talk about pressure

Oswego, IL – a suburb about an hour southwest of Chicago

Easily my dad.  He’s been a self employed general contractor for 30 years and supports a family of 6.  Not many people could do that.  He’s shown me time and time again how constant hard work is necessary to make it in this world.

Primarily football and baseball.  I was a catcher in baseball and actually almost had a tryout with the Tampa Bay Rays of the MLB.  I was already at Drake when the offer arose

I’ve been a linebacker since I was 8 years old.  On offense I played RB,QB, and WR in high school.  I actually lined up at Fullback a time or two for Drake in college.

My instincts for getting to the ball.  I’ve averaged 100 tackles per year.  I diagnose plays extremely fast and always put myself in position to make a play.

For the offensive line, I look for stance differences on run and pass plays (some guys will change their stance accordingly).  I also look at what moves they struggle with when run and pass blocking.  For running backs I look for alignment differences for run and pass plays.  Some guys may cheat to give themselves an extra half step on a certain play.  I also look for how they pass block (if they like to cut block, or stay up high) and adjust my pass rush moves accordingly.  Overall, I look at certain situations to see if there is a certain play they like to run (3rd & short, 3rd & long, etc.)  Im a film junkie who logs at least 15+ hours per week watching and breaking down film.

Probably David Johnson from Northern Iowa (now plays with the Arizona Cardinals and is tearing it up).  He is just a complete football player – big, strong, fast, athletic. The 1st series of the game I tackled him in the backfield. After that he just went off for like 3 touchdowns though.

Derrick Brooks of the Tampa Bay Buccaneers. He was a little undersized, but made up for it with aggressiveness, instincts, and speed.

There’s been a few, but the one I’m overcoming right now is people saying a slightly undersized linebacker from a small Division 1 school can’t play professional football.  Everyday I’m overcoming that and proving more people wrong.

I go out to the 42 yardline and do the same stretches while listening to the same playlist. Right before I go onto the field I listen to a few Ray Lewis speeches.  I also have a lucky shirt that I have worn every game since I was a freshman in high school.

My leadership abilities.  I received captain votes after just one season in college, so I just wasn’t a leader as an upperclassman.  I believe I am very genuine with people and can better those around me with my words and actions.  I am one of only a few 2 time captains in Drake’s history, which stretches back to 1881. 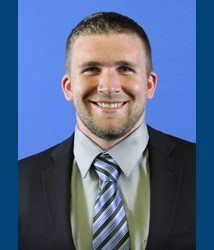 Probably wanting to do a lot of things at one time.  Being a team leader all my life I have always been pulled in a lot of directions and sometimes I have a hard time telling people no.

Nothing has ever been given to me, so I have earned the chance to be here and lead your team to a championship.

My grandma who passed away in 2007, and my 2 great grandpas who both served in WWII.

A new Toyota 4Runner.  I had one with 275,000 miles on it, but then it died.  So I currently drive a mini van and am looking to change that ASAP.