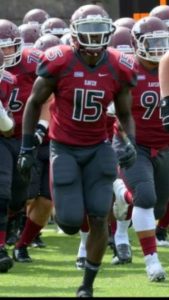 Lock Haven wide out Jeremy Cornelius is a big boy with great hands.

The coolest thing that I’ve done off the field was giving cleats to players in my home town. After the firing of our football coach there was a surplus of cleats in the equipment office at school. So I asked the equipment manager could I get a couple pair of the cleats to take back home and give them to kids that needed cleats. I ended up giving out 4 pairs and the pair off my feet to a player.  Just to see the smile on their faces made it worth asking and it also makes me want to give back even the more in the near future. A little gesture like cleats did so much.

Diversity, It was a class I took at Junior College. The teachers name was Mrs. Dwyer! It was the most challenging class that tested every aspect of your character. I really enjoyed it.

Role model? I don’t think I could say I have just one? But I could say my role model(s) growing up would have to be my aunts and uncles. My Grand mom had 8 kids ( 6 Boys, 2 Girls) and they have been everything to me. So yes I would have to say those 8 people really showed me how it is to be humble and never forget where you came from so I would say my role models are my aunts and uncles.

Yes, I ran track in Middle School and High School.

Yes, I played TE my first year of football.  I can thank Coach Terry for that haha. I played CB, LB and RB for one play In 9th Grade.

My physicality, my size and strong hands. I’m not afraid to go across the middle and make that tough catch. I play in the slot and can move around. I don’t have to play on the outside only. Overall my knowledge of the game, I just really enjoy studying game film, getting that slight edge on a safety or corner. You have to be a student of the game and once you perfect that, well the rest is second nature I’ve been playing football for years.

I look for tendencies. What coverages the defense likes to run on this down and distance. I keep track of how many corners and safety’s play and in what situation they play in. I look at corner backs feet placement and routes they have trouble guarding. Observing the physicality of the corners, watching every play that the corner or safety could not defend and got beat on and knowing what to model my play around.

A cornerback from UCF that went to JUCO, He wasn’t the biggest or fastest but he was the best cover corner I’ve ever seen.

I would compare myself to Larry Fitzgerald.   I love competing and willing to lay it all out there on the field for my team. I’m willing to catch the tough passes in critical situations. I love those moments where it’s all or nothing and a 4th down conversion will decide the outcome. As a Wide Receiver, I live for those moments. Larry Fitzgerald has caught some of the most amazing post season passes in critical moments ever.

In April 2010, my brother Akeem Cornelius was killed in a car accident. Two months later, my close friend Dontel Taylor was murdered. Four months later I received a phone call saying you’re going to be a dad. You never really get over death you just use that as motivation to keep pushing forward because those dudes were in my corner from start to finish. Dontel and I played football and I’ve always said he was one of the best to do it but people pick different routes so I can’t be mad at him. As far as having a child at a young age it scared me to death. Only thing I could do was grow up extremely fast, mature at 19 and make a better way for my son. My whole plan from day 1 was to get him out of the situation that he’s in now and I don’t plan on stopping until he tells me “Dad ok that’s too much I already have everything plus more”

Yes, I actually do have a ritual; I go to sleep playing Luther Vandross greatest hits ha-ha. I have to thank my dad for that one, it just relaxes me. Then when I wake up in the morning, I roll out of bed, Say a prayer and take a shower. While I’m in the shower, I play 3 certain songs ( Drake Ft. Lil Wayne -Miss me, Lil Boosie – Big Dog, Young Jeezy – Get Right). Then I put on my shorts on and do 100 pushups and 100 sit ups. After that I put my clothes on get my book bag and listen to lil Wayne Carter 2 album the whole morning until it’s time to go out on the field for warm ups

I would have to say my biggest strength would be that I have a big body. I have strong hands, very precise route running ability.

I would have to say my weakness is blocking. I have to improve on it.

I would say, wherever you need me on the field I’ll do just that. I’m not a diva in anyway. I’ll do the dirty work, I have no problem with it whether it’s Long snapping,  Place holder Gunner, Kicker or anything Special Team related in that manner I’m willing to do it. I know that my chances of making an NFL roster will be my ability to take advantage of Special Teams. Everybody needs to understand that if your put on a special teams unit your unit is the most important. Special Teams will make or break a game. So I’ll do whatever it takes to get the trust of the coaches. Once, I get that call to play Wide Receiver, Safety, Linebacker, Tight End, Corner or Running back I’ll be ready to go!

My favorite player growing up was Eddie George and it’s only right that my favorite team was the Tennessee Titans. Everybody always asked me, why? and how did I choose them? Well I was at that phase in my young life where I just said it’s time to pick a team.  Titans where in the Super Bowl at the time plus my favorite color was blue so I choose them. It still hurts to this day Kevin Dyson got stopped at the 1 yard line.

Without Question it would be Susie Swan, Mother Regene Cornelius and Akeem Cornelius. Susie Swan is My Grandmom and I’ve seen how it affected my mom losing her so to have another dinner with her would mean the world to my mom. As far as Akeem, I just wanna ask him a couple questions and laugh about everything we been through and just ask him why did he get in that car that night and not in my car. Everything happens for a reason and I’ve seen the reason for it but it’s still not fair in my eyes.

It wouldn’t be a item. I would give my mom the rest of the money it would take to pay off her house so she wouldn’t have to worry about it anymore. She’s retired right now so that would help her out a lot.