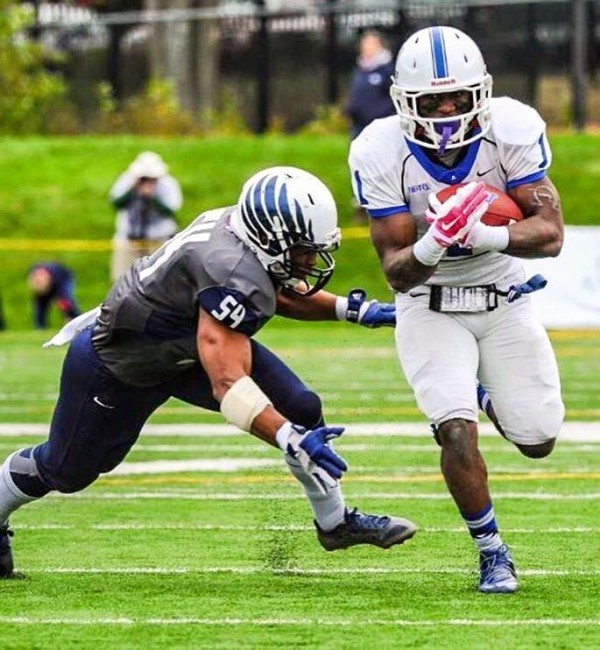 During the season a few of my teammates and I will go to a local elementary school and read to the kids or play with them them during their recess.

Hardest class that I’ve ever taken was Intermediate Accounting I & II.

I was born and raised in New Haven, Connecticut.

I have two role models. One being my father whose been in my life since birth and guided me to be the God fearing man that I am today. He introduced me into all the sports I’ve played in life and has taught me great principles about life and fatherhood. The second is my older brother Jordan. He’s my best friend and with his accomplishments as well as mistakes has shaped me to go the route I’ve gone to. I always aspired to be like him when I was younger and no matter what he’s always in my corner and making sure that I’m doing the correct things to better my future.

Growing up, I started playing basketball, soccer, and baseball. As I got older, I traded soccer for football and also ran track and field throughout high school.

At my position I’m very versatile. I’m a hard and patient runner, who can run between the tackles and also on the edge. I can catch out of the backfield as well as line up as a slot receiver and run routes. I’m not afraid to block and sacrifice my body to protect the pocket.

When I break down film, I look at all tendencies for the d-line and line backers. I want to see who’s the fastest and the strongest. If the team blitz often I want to be able to know where it’s mostly coming from and what coverages that they will be in.

The toughest player I’ve ever faced is Jared Casey, who’s plays the role of a Safety/Linebacker on my team. He’s has a real nose for the football and always tends to find me during practice no matter if it’s a run or pass.

I would compare myself to Darren Sproles. He’s a multi purpose back who does it all from the run game, pass game, and return game. Anything can happen once the ball is in his hands.

One of the biggest obstacles I had to face was losing my best friend during this past season to gun violence. I was able to get through it by the grace of God, my family and teammates. I made sure to take him with me on the field and he was my angel that helped me play even harder in his honor.

I listen to Jazz and R&B songs. One gospel song and rap. I have to listen to Future and J. Cole. In addition, I’m also the last person to walk out the locker room.

Biggest strength would be my speed and the ability to catch the ball out of the back field. My versatility helps me succeed above measures.

Biggest weakness would be blocking. Being a small running back, most defensive players will use the bull rush technique. I have to be able to out smart them and think two steps ahead of them.

I would tell the GM, you’re getting a player who can play more than one position. A hard worker and selfless team player who strives to be the best football player that he can be!

My favorite player growing up is Terrell Davis and the Denver Broncos.

Lebron James because a he’s my favorite athlete of all time. My God Mother Lynn Shaw who’s not alive anymore. I would want to ask her if she’s proud of me and hope I’m keeping her smiling in the heavens. J Lo because she’s been my crush since I was a kid.

I would buy my parents a house even though they deserve so much more.