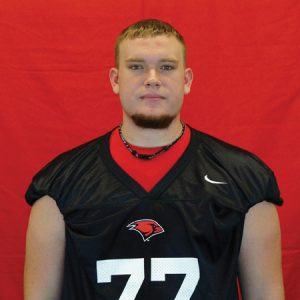 Played out of San Antonio, TX at the University of the Incarnate Word (UIW) FCS school in the Southland Conference.

Back in my hometown I was able to help run a free football fundamentals camp for the kids in that area. Very enjoyable experience.

My role model is a guy named Kelvin Beachum, who currently plays for the Pittsburgh Steelers. He is from my hometown and has always been my go to guy for advice or tips for playing this game we both love.

Growing up in a small town you pretty much had to participate in every sport. I played baseball, basketball, threw the shot and discus.

Aside from playing offensive line, I played Defensive Tackle/Defensive end in high school.

My technique and footwork are great assets that I posses. Being coached by a former NFL Offensive Line Coach in Tony Marciano, and playing four years in a pro style offense, I learned the footwork necessary to compete at the professional level. Nowadays so many offensive lineman in college are taught zone step footwork that doesn’t very well translate to the NFL, so that is why I believe that me having already learned the footwork and terminology of the pros will separate me from other free agents.

As far as observing myself, I look for the tiniest of details in my play that may be detrimental to executing my assignments. One 6 inch step in the wrong direction could be the difference in getting to my man or not. When I look at the defense I try to pick up on the non-obvious things that could help me get a jump on what they might be running. For example I try to always know where the safety’s are aligned, if they are low there’s a good chance pressure might be coming from the front seven.

Johnathan Woodard out of Central Arkansas.

Logan Mankins is someone I try to emulate when I play. He’s really aggressive, some would say nasty. Solid in pass protection and his footwork is impeccable.

Growing up in a small town where the expectation was that you would end up selling drugs on the street by the time you were in high school. I had to be locked in on my goals constantly. I wanted to be the first one in my family to go to college, but because My family had no money, it would have to be on a scholarship. That’s why I put in the extra hours every day in practice and gave everything I had every game. The greatest feeling my signing my name on the scholarship papers knowing I had a ticket out of that place and on to a better future.

I go over every play we are going to run in my head and visualize how I am going to react to every possible move they make.

My strength needs to continue to improve.

I’d say at least give me a minute instead of just a second. Then I’d say that I am a very hardworking and reliable young man who has a passion for playing the game of football. I’ve been overlooked my whole life and it has only made me stronger in every aspect. I’d be willing to give your team everything I’ve got if I just got one opportunity. Don’t miss out because I will be successful, it’s just a matter of who takes the chance.

Ray Lewis with the Ravens

An engagement ring for my girlfriend.