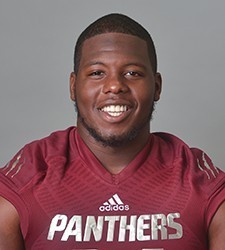 I’ve done a myriad of things off the field. The coolest thing I’ve done out of them all  was a turkey giveaway in Pocatello, ID while attending Idaho State University. This particular off the field activity touched me because I was able to help those families that were poverty-stricken. After this activity it was no doubt in my mind that I helped many families be able to enjoy their thanksgiving.

The hardest class I’ve taken in college so far has to be Educational Statistics.

My role model is my mother because she’s the most determined and hardest working lady I’ve ever seen.

My instincts and knowledge of the game separates me from the pack. I love to move off instincts rather thinking what I have to do while being on the football field.

I tend to look for what type of running backs they feature and where on the field they put them in or is he a power back, scat back etc. Then I focus on the o-line are they huggers, power blockers and tendencies on pass/run plays foot up or foot down. The last thing I try to pick up on is play calling what they do on 1st and 2nd down because we all know 3rd down is money down.

I don’t about the toughest player I’ve ever faced but my sophomore year I have to say the entire Montana offensive line.

I would compare my game to be a mixture between Lavonte David and Sean Spence. The reason why I feel my game is similar to theirs is because I show some of the same instincts as those guys, we have a nose for the ball, use speed to beat blocks but when needed stick our helmet in there, we’re a bit undersized with hearts of lions, and grew up around the same coaching from youth leagues throughout Miami and graduated from the same high school.

The biggest obstacle I had in my life was going under the radar in high school. I led my team in tackles two years straight and flew under the radar. It was getting to a point I didn’t want to play football anymore. No offers, no recruiting letters not anything but other guys were flashing and talking about these things. I overcame these things by keeping god first and the support of my family. Patience also helped me a tremendous amount because I focused on my craft and kept doing everything right and everything started to fall in place.

Yes I make sure the 23rd psalm is in my compression shorts before I put my game pants on.

My biggest strength is being loyal and committed to my teammates.

My biggest weakness… Pass rushing! Well I’m not a defensive end or lineman but I want to be a complete player and I think that area of my game is slacking. I’m quite sure with the right coaching that would enhance.

Hello, my name is Demetrius Allen and I am originally from Miami. FL. I am an individual that is dedicated to making a difference in my life, as well as those around me. In whatever it is that I do, I want to make sure that I’m giving it 110%. I am an individual that has overcome many obstacles in my life, and I just feel as though there is no room in where I’m trying to go to give up now.

Who were your favorite player and/or NFL team growing up?

My favorite player growing up was Zach Thomas, a little undersized guy who continued to beat odds through his career. Lastly he was a Miami Dolphin!

The three people dead or alive I would choose to have dinner with are Martin Luther King Jr, Jesus Christ and my great grandfather. These three people have significantly played a major role in my life and the lives of a plethora of other individuals. They are all deceased but while being alive they lived with a purpose, they left their mark on this earth. Martin Luther King Jr stood for equality for people of color and was a successful leader. I would just want to pick his brain and receive great advice from him just because of the courage he had. Jesus Christ died on the cross for us, now that’s amazing! He is the reason everyone single person on this earth is able to play the game football he blessed us with the abilities. I’ll like to just look him in the eyes and say THANK YOU. Lastly my great grandfather Calvin C. McKinney “The Great One” is what he says. My grandfather was a leader and a true man to his family he was a guy that was powerful served the country and took nice care of my great grandmother. Talking to him about leading my family and what it’s gone take to do it like him would be great if I could get that chance to eat dinner with him again.

A house for my Mother she deserves it!