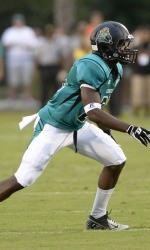 My position is Nickel back

I graduated from Coastal Carolina University

The hardest class I taken in college was Math 130i

I don’t really have a positive role mode, but my uncle I must say is the reason I play football today. He was the one with me outside running routes and plays in the road when I was a kid.

Growing up I played football, basketball, and did track.

In high school played running back, WR, Safety. And in college I played Corner back, and Nickel

What separate me from others at my position was being a student of the game making smart decisions.

When breaking down film I may watch a play 3 or 4 times. I look at the formation the other team is in as well the personnel. Next I look at where is the ball located on the field to see what the other team favorites plays or routes that are ran on the particular spot on the field. Then I put my self in a play call and go through my progression on the field. Once I finish watching film I go back to look at the guy I will be going up against giving myself a scouting report.

The toughest person I ever faced I would have to say Kelvin Benjamin in high school, his size was just unbelievable in high school. As well in college I would say Darrin Peterson from Liberty University.

I really don’t compare myself to anyone I feel like I’m my on player, but If I had to choose it would be Ed Reed his football intelligent of the game is incredible he seems to be always in the right place at the right time.

The biggest obstacle in my life I would have to say what I’m going through now. I currently have a grandmother who currently has cancer and me being able to stay focus and positive for her is keeping me with that drive and motive to make it to the NFL and make her proud. Everyday I give myself positive self talks that she will make it through this cancer process and I’m going to do whatever it takes to make that NFL dream come true. I told myself while she fighting to beat cancer I will be fighting to make that 53 man roster.

I don’t really have any pre-game rituals besides praying before every game.

My biggest strength is football intelligence being able to make the right decision or know a play before it happens. Also putting myself in better positions to help me be successful on that play.

My biggest weakness I would say I tend to play high sometimes during the play meaning with my hips, but can easily be fixed through repetition.

You where a GM I would tell you that if you where to draft me I’m going to give you a 110% everyday because I’m a guy with a motive to do or be great at whatever I do. I want to be that guy that changes lives in my community and even around the world. When a kid from my community back at home in Cocoa, Florida turn on TV to watch football I want them to be like I know that guy I want to be just like him and I think overall that will make my community or even other communities better because now its creating a positive mind set for children to be better in life such as making good grades, graduating college, being successful at football all because somebody they knew from there home town that where once in there shoes before now playing professional football

My favorite player growing up was Warrick Dunn and Sean Taylor. And my favorite NFL team is the Dallas Cowboys.

If I could have dinner with 3 people it would be Jesus, Ray Lewis, Joe Moglia.

The first big item I would buy is my mom a 2016 dodge challenger.