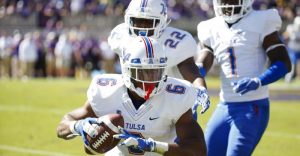 Tulsa DB Darrell Williams is a physical corner that has good hands and is not afraid to lay the BOOM!!

Helping clean out and clean up homes after tornadoes struck Joplin Missouri. Also doing things such as speaking at my former high school, other high schools and to youths in general is something I really enjoy.

My mother. Her ambition and drive is something I’ve admired forever. I get a lot of my competitiveness and desire to be great from the way I’ve watched her work and succeed in life.

Growing up I played baseball, basketball and ran track through High School

I played running back all my life until getting to High School in which I’ve played cornerback ever since.

My size and physicality matched with my quickness and speed. It’s one thing to big big and strong but to be fast and quick as well has been an advantage for me over the years.

Paxton Lynch, I had a solid game against him but he puts the ball where only his WR can get to it most of the time.  Great QB.

Orlando Scandrick , Chris Harris but faster. Natural slot corner. Scandrick is closer to me speed wise, Harris because he knows how to work in that tight space and because of his football IQ. My ball IQ is very high.

Complete knee dislocation in 2013. I tore my ACL ,MCL, PCL all at once. Some thought I would be lucky to run again. Playing again and playing at a high level was out of the question to many people. The doubt I saw from people motivated me. I prayed on it daily and worked harder than I’ve ever worked in my life. In my mind nobody in the world works harder after I was able to overcome that and not only play again but play again at a high level.

I do the following in order; pray, listen to music, talk to my younger brothers, pray more, listen to more music, then it’s time to go to war.

My biggest strength is my press man and quick read zone coverages. My biggest weakness would probably be the short game pass plays when in a deep 1/3 zone. 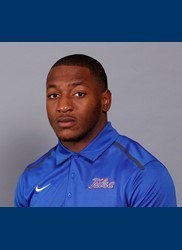 Tom Brady and New England Patriots. Tom is the Michael Jordan of football in my eyes.

I probably won’t buy anything too big other than my first home.