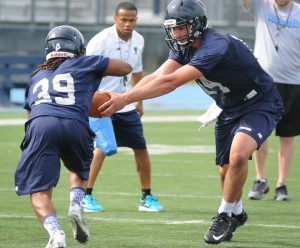 Darius Benders is a very solid running back with quickness

Coolest thing I’ve done off the field is going to middle schools, talking to kids and coaching youth athletes, from the Maine area and helping them improve there skill set.

My Mother, because her work ethic is 2nd to none. I watched her work for everything we have so she could provide for me and just her support for me throughout my whole journey has been there through the ups and downs

Yes growing up I played basketball, baseball , football , and even swim

I think what separates me is my ability to be versatile. I can catch , run, and block

I’m looking for the strengths of the defensive interior. The linebackers habits , strengths , weaknesses etc. Then I’m looking at the defensive scheme.. Where my reads are most likely going to be at based on alignments of lineman and lastly I look at there secondary players habits , do they break down when they tackle or are they just flying downhill .Then come gameday the game slows down.

Udochukwu Vic Ochi from Stony Brook was a good player, who was all over the field

Devonta Freeman, he’s a guy who does a little bit of everything. He’s a north/south runner who possesses short area quickness

Getting to the University of Maine and going from walk on to starter. I went to 4 different schools including a Junior college and Community College in order to be academically eligible to play division 1 ball. I was only at Maine for 2 seasons. First season was a big learning curve for me but once I got the offense down I started making plays and coaches took notice. 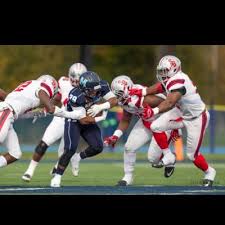 My lower center of gravity, power , and ability to make defenders miss

Making sure I don’t get caught on long runs

I would say I’m going to give you 100%, day in and day out. I’m going to make plays when my number is called no matter what.  I’m going to do whatever it takes to make your organization better.

Buy my mom a luxury car and a house first