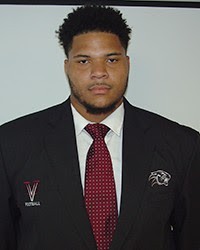 Virginia Union has a monster offensive tackle in Dahon Taylor. He does a great job at slowing down defenders.

During the Spring of 2015, The athletes and athletic administration of Virginia Union protested the build over of Lumpkin’s slave jail. Once the slaves were freed, the jail’s facilities were turned into where Virginia Union would get it’s roots. Most of the land was already taken.

God is my only role model. I do learn from others and listen to advice but God is the only Idol in my life.

Soccer,Basketball, Baseball, and Track and Field

At my position my athleticism and mind separate me from others. I have been blessed with athletic ability and I always feel a step ahead. As far the mind goes I stay calm through adversity. Things can go bad but what are you going to now?.

When breaking down film I first look at the down and distance, then the alignment of the defense. Then check for blitzes, slants and stunts. Then I look at players for their tells which can help me know when a blitz is coming or a certain move they show they’ll go to.

Myself. As long as I can get mentally prepared I know I can play with anyone.

I would not compare my play to anyone, my athleticism gives me a unique skill set.

The biggest obstacle I had to overcome was getting in my own way. Once I took responsibility for being the biggest problem throughout my life I grew not just on the field, but also in the classroom and as a person.

Do you have any pre­game rituals?

Before the game I just like to practice my steps and sets.

My biggest strength is my mental toughness

I would say my biggest weakness is not giving my opponent enough credit. Sometimes you run across others with talent and then it’s time for a dog fight.

Picking me is a great decision. I will do whatever for the team to ensure success. I will fight through adversity and lead others through it.

Growing up my favorite player was Brian Dawkins because of his aggressiveness. The Eagles were my favorite team.

Whatever my mom wants.