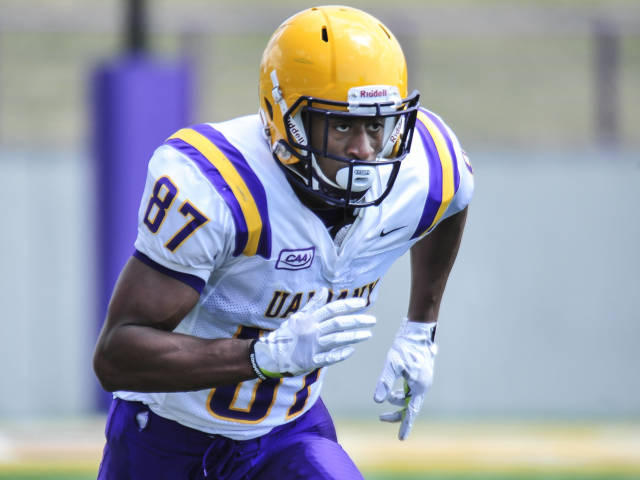 Hosting the Capital District Pop Warner Challengers game at UAlbany. Divided the kids up amongst the team and had a flag game going. Honestly, we probably had more fun than the kids.

I’d have to say both of my parents. Though apart, the both instilled many characteristics and values that I still carry with me to this day.

Baseball was my first love. Played basketball and ran track as well.

I have strong hands and a big catch radius. I run smooth routes and have great technique off and to the ball as well.

I look to find any tendencies in my opponent that I can exploit. Whether he is an inside or outside arm jammer. Whether or not he likes to mirror or play trail technique. Anything to put myself in a better position.

AJ Green. He has long extremities and is real rangy, so he makes a lot of extraordinary catches seem ordinary. Hes really good at making plays on the sidelines too.

My junior year of high school I moved down to Leroy, Alabama with my pops. It was just a different way of life down there. Pops had a farm, so he had me out there working hard! I can proudly say that it was all worth it though. Made me stronger mentally and physically. Ended up playing along side some great athletes like Pittsburgh Steeler Sammie Coates and elevating my game.

Visualize myself making plays/blocks etc. Listen to music. Mostly Gucci and Waka. Dap up every player on the squad and say a prayer for the safety of all participants in the game. 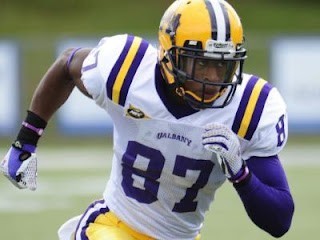 Exposure is probably the biggest hurdle for small school players like me. The fact that we weren’t doing it in the SEC or ACC seems to diminish what we do. That isn’t thee case at all. We ball!

My work ethic and my ability to lead. There’s more to football than what you do on the field of play.

I’m a perfectionist and my own worst critic. Always thinking it could have been better diminishes what has already been done.

I will earn my keep. All I need is an opportunity to showcase my talents. Ill let you make your judgments from there, but I bring tough, hardworking, physical mindset to the WR position and am willing to do whatever to better my team.

Anything my mother wants and maybe a used car for myself. Cant do too much.