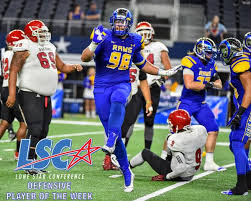 My teammates and I go to local elementary schools and read to the kids. It is an enjoyable experience and well deserved to see the smiles that we put on the kids faces.

My Dad. My Father gave me the ability to learn and love the game of football. Watching him Coach growing up has made me passionate about playing the game.

Being able to take on double teams and working on a pass rush. Being in the trenches in a grueling but exciting part of what I do. I wouldn’t want it any other way.

Formation tendencies, what certain plays a team will do in a down and distance situation, indications of run or pass, how the tackle pass sets to allow myself to work on a specific move to get a sack.

My freshman year, there was a tackle from Chadron State who gave me a dose of what college football was all about. He ended up getting drafted to the Eagles. That was the biggest and most toughest tackle that I have ever gone against. 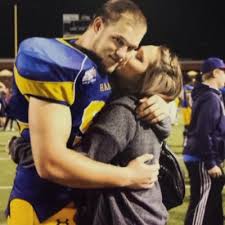 JJ Watt. He has a high motor and is extremely passionate about the game. I idolize him and see myself as a guy who plays just like him and has the same passion for the game as he does.

I lost one of my best friends before graduation. His name was Cody and he was going to play at Tarleton State. We would have been able to play against each other. It was hard at first to overcome such a loss, but I knew that I had to dedicate my play to him and know that he is watching over me during every game and snap.

I like to sign the Monday night football theme song and listen to “Bet Money” by Gucci Mane and K Camp.

Controlling the line of scrimmage and stopping the run.

Knowing when to use a inside move. There have been time when the tackle gives me a vertical base and I would go inside instead of working an edge.

That I am a hard worker and I will be a reliable player for the team and follow what the coaches and GM tell me to do.

Dallas Cowboys. Troy Aikman was my favorite player growing up. I used to have a cowboy set and would go in the backyard and think that I was him.