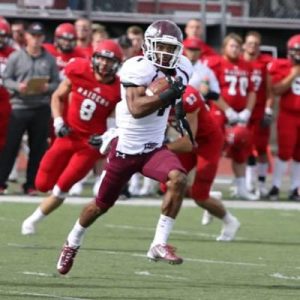 Being an active member/leader in FCA and going to a local high school in my area and speaking to a group of kids and giving them encouraging words.

Hardest class I ever took was by far college algebra. If it’s not in a stat sheet I prefer to stay away from numbers lol.

I was born and raised for half of my life in Kansas City, Missouri, the other remainder of my life has been lived out in my second home Brooklyn, New York.

I have a few, but one of my main role models would be Jay-Z. Just to look at everything he has accomplished and never became complacent. He has enough money for his kids, Children to be well off. But yet he still strives for more. And people like that I study and try to imitate. Nothing wrong with being a copy cat until you copy the wrong cat.

Football was always my first love, but I played other sports as in basketball, baseball, track, and even wrestled for maybe like a week or so lol.

Growing up I played Running Back, Wide Receiver, and even QB in (pop Warner), on the defense of side of the ball I’ve always been a defensive back whether it was a Safety or Cornerback.

At my position I’ve always stuck to the same theory that separates me from others. It’s rare that you have a corner who is a sure tackler like a safety, has the speed of a wide receiver, and can still cover like a corner. There are corners out there like that. But most corners are one of the three, or two of three. All that combined with my work ethic and hunger to get better truly separates me from the pack.

When I watch film the very first thing I look for is confidence. Is this guy confident in what he brings to the table and is his confident in what his team does. The second thing I always look for are pre-snap tendencies that may give away what he’s about to do. The third thing I look for how in unison a player may be with his other teammates and with his coaches plan. And last but not least I always check for a players speed. Since speed is one thing I hang my hat on, I always check and try to compare a players speed to mines.

The toughest player I have probably ever faced 1 on 1 would be Brandon Rowe, or Darrian Turk, which both happened to be my teammates. And those 1 on 1 battles made it much tougher because we all knew each others secrets and habits. So it truly came down to who wanted it more.

I’ve always struggled with this question because I feel like I’m so versatile and I could do so many things. At the corner position I would probably have to say Patrick Peterson. Now before I say anything else, let me say I am no where near saying I am as good as Patrick Peterson. But he is someone I have always mirrored my game off of, even from his LSU days. He’s a big, physical corner, very patient at the line of scrimmage, travels to the best wr, a huge factor on special teams, and can cover and tackle at a high level, and he’s a huge fan of Deion Sanders.

The biggest obstacle I had to overcome, was not playing much football when I was young due to custody battles. And spending the summer in different states with my father, and then coming back just in time for school to live back with my mom. I overcame it but just never giving up and kept playing football the way I knew how and meeting people and learning from everything I could possibly learn from.

I’m not big with pre-game rituals. One thing I always do is run the route tree as a defensive back on the field before warm-ups, and I always pray before strapping my helmet up every Saturday. Other then that I like to free myself of rituals, because when you have rituals and one doesn’t get done before a game that can mentally bother you sometimes.

As a small school player I think there’s only one obstacle you truly have to overcome and that’s the lack of exposure. But I do feel there are plenty things you have to prove. As in that you can play with top tier athletes, that you can perform at the top level when the game is faster, and that you understand the game when it’s much more complex (just to name a few).

By far my biggest strength is my hunger to get better and my work ethic. I don’t care who you are you can always improve on something. And my work ethic creates a drive in me that never allows me to become complacent or satisfied. I live by a motto ” that if your still talking about yesterday it must be because you haven’t done anything today.” Have to prove yourself everyday! 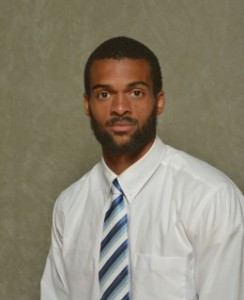 I would say up until this point my biggest weakness has been playing to the level of my opponents. Which in a sense sometimes could be a great thing. Because when someone comes along that takes all the effort I have, I will rise to the occasion. But it’s bad and a weakness in the sense that I feel you should maintain a level of your own dominance no matter what. Cause sometimes when your much better than a guy and your playing to his level he could gain an advantage over you, when he has no business on the same field with you.

I would say, when it comes down to it, I’m not going into any program or organization promising 9 interceptions and 5 kick returns for a touchdown in my rookie season. But what I will promise is a leader, who will show up to work everyday looking to outwork the hardest worker on the team. I will promise an skillful talented athlete who truly loves the game. (Which to me is very important cause every guy at this level is skillful in some sort, but a work ethic can be a skill set when that skill set doesn’t work hard. But when you have both together in the same package things change for the better.) I would promise a natural born leader who’s looking to create more leaders not followers. ( a team is a true team when iron sharpens iron) I would sum it up by saying, by me doing all of those things without a doubt I’m sure it will translate to significant affects On and Off the field which is what is most important these days, the full package and not just someone who is half the man.

Favorite player has fluctuated over time, but at this point it stands to be Eric Berry, for his drive, hunger, and the dominant attitude he brings every Sunday. Favorite team KC CHIEFS.

Car, Range Rover to be exact.