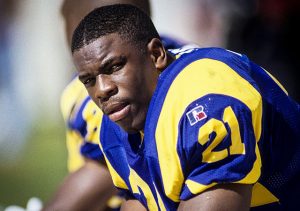 The death is being investigated as a suspected suicide, according to press release from the department.

Phillips, 40, was facing the possible death penalty in the alleged murder of his former cellmate at Kern Valley State Prison.

Here is the official release from the prison:

Officials at Kern Valley State Prison (KVSP) are investigating the death of inmate Lawrence Phillips as a suspected suicide.

The incident occurred at 12:05 a.m. Wednesday, Jan. 13, when staff conducting security checks found Phillips, 40, unresponsive in his cell. He was transported to an outside hospital where he was pronounced deceased at 1:27 a.m. Next-of-kin has been notified.

Phillips had been in an Administrative Segregation Unit on single-cell status since April 11, 2013, after he was suspected of killing his cellmate. Phillips was currently in the early stages of the trial in Kern County for the homicide.

Phillips was received by the California Department of Corrections and Rehabilitation on Oct. 16, 2008, from San Diego County to serve a 31-year, four-month sentence for inflicting great bodily injury involving domestic violence, corporal injury to a spouse, false imprisonment and vehicle theft. Phillips played in the National Football League prior to his incarceration in state prison.