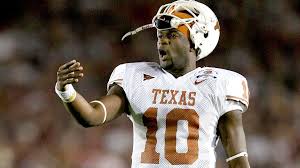 Former Longhorn Vince Young was arrested this morning for DWI

Vince Young was a legend in Texas, but that did not stop Austin Police from doing their job.  According to multiple reports, the Longhorn football legend Vince Young was arrested Sunday night during a traffic stop on the Interstate 35 service road.

Police arrested Young, 32, at 11:16 p.m. during the traffic stop, which happened in the 4600 block of the North I-35 service road near Airport Boulevard. Travis County Jail records showed Young was still in jail at 9:35 a.m. Monday.

Young was charged with a misdemeanor for driving while intoxicated.