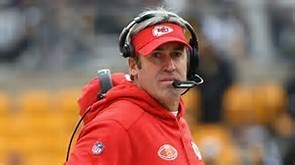 The Eagles will hire Doug Pederson, the Kansas City Chiefs’ offensive coordinator as their next head coach according to Philadelphia Daily News reporter Les Bowen.

Doug Pederson will be the #Eagles coach, league source confirms.

The move can’t be official until the Chiefs’ season is over. It will be the first head coaching job for Pederson, the former NFL quarterback.

Pederson has a long history with Reid, dating back to when Pederson was a backup quarterback for the Green Bay Packers in the late 1990s and Reid was his position coach. Pederson’s first NFL assistant coaching job, after playing in the NFL for 10 seasons (one of which, 1999, was with Philadelphia), was on Reid’s Eagles staff in 2009. Pederson was on the Eagles’ staff until 2013, when he went with Reid to Kansas City to be his offensive coordinator. Pederson has spent the past three seasons in that role.

Don Banks of Sports Illustrated reports that the Eagles are interested in former Lions HC Jim Schwartz regarding their defensive coordinator vacancy.