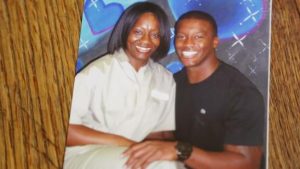 Today expect a monstrous game from Demaryius Thomas, who will get to line up and play with his Mother watching him live for the first time.  Katrina Stuckey Smith, Thomas’ Mother, will be watching Thomas play in-person for the first time ever, according to Denver Post’s Woody Paige reported Sunday.

Smith was sentenced to 20 years in prison in 2000 on a drug trafficking charge. She has been routing for her son from a federal prison in Tallahassee, Florida.

According to NFL.com, In July, President Barack Obama commuted the sentences of 46 federal prisoners, including Smith. She was released to a halfway house on Nov. 10, but couldn’t travel for 60 days. The Broncos earning a first-round bye helped provide the perfect opportunity for her first trip to Denver this weekend. The visit was initially held up because Smith is not permitted to be in a drug environment — Colorado has legalized marijuana — but her parole officer allowed the trip.

Thomas was super excited that his Mom would be in attendance.