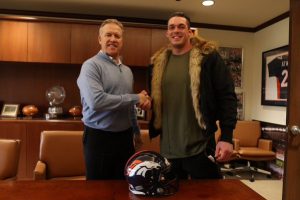 Derek Wolfe started the season with a 4 game suspension, and he is now ending his year with a 4 year contract extension. Today the Broncos rewarded the former Cincinnati Bearcat with a huge contract.

Friday, the Broncos rewarded Wolfe with a four-year contract, locking up the first of several key free agents. The deal is worth $36.7 million and includes $17.5 million guaranteed, according to the Denver Post. John Elway was pumped with the signing.

“It’s great. Derek’s worked his tail off,” Broncos general manager John Elway said via the team’s website. “He’s had a tremendous career so far — a short career, only four years. So we’re looking forward to having him here for some more time. He’s worked very hard and well-deserved, so we’re glad that we can come to an agreement. Now he can only look forward and, hopefully, continue to get three more wins this year.”