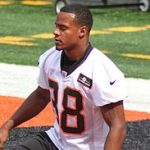 Shaun Prater has been signed by the Minnesota Vikings

The Minnesota Vikings announced a series of roster moves on Tuesday including signing S Shaun Prater to a contract and placing S Antone Exum on season-ending injured reserve.

After playing college football for Iowa, he was drafted by the Cincinnati Bengals in the fifth round of the 2012 NFL Draft. He has also played for the Philadelphia Eagles, and the Minnesota Vikings.

Prater has bounced around the league but this is his second stint with the Vikings.