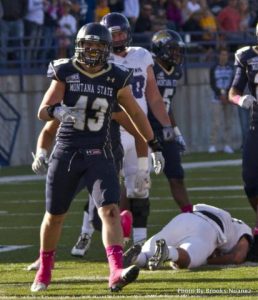 The Minnesota Vikings announced the signing of rookie LB Alex Singleton to their practice squad on Tuesday.

The 6-foot-2, 242-pound linebacker went undrafted out of Montana State this year. He was signed by Seahawks on May 8 and released Sept. 5. Singleton ran a 4.65-second 40-yard dash at his pro day in March with a 7.13-second three-cone and a 4.25-second short shuttle. He also recorded a 31-inch vertical leap and 10-foot broad jump. He had nine tackles during the preseason for the Seahawks. Singleton had a short stint with the Patriots as well, before getting released.

Singleton takes the place of another small school football player. Yesterday, Zach Moore the former Division 2 standout from Concordia St. Paul was called up to the 53 man roster.  Singleton was signed to their practice squad as a corresponding move.