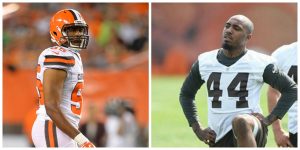 Two Browns players were arrested on Christmas day for speeding

Cleveland 19 News Investigative Reporter Scott Taylor broke the story and says Saunders was arrested for OVI and speeding.  So far investigators from the Ohio State Highway Patrol have said not why Bryant was arrested.

We are told a gun and the prescription drug Adderall were also located in the car driven by Saunders.

Both were taken in by troopers

Armonty Bryant played at East Central and De’Andre Saunders played at Tennessee State University. Bryant was placed on five years of probation after being caught selling marijuana in the parking lot of his university before he was drafted and had a previous DUI conviction in 2013.

Bryant is in the starting rotation for the Browns and has 28 tackles and 5 1/2 sacks this season.