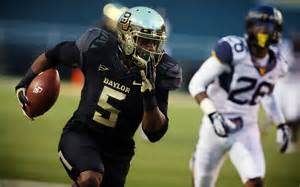 Adam Caplan of ESPN reports that the Seahawks are signing WR Antwan Goodley to their practice squad after he worked out for the team on Monday.

Goodley played college football at Baylor University from 2010 to 2014. During his collegiate career, he earned All-American honors as a wide receiver and recorded 150 receptions for 2,366 yards and 21 touchdowns.

Goodley was signed by the Dallas Cowboys as an undrafted free agent but was released when the team began making roster cuts in September.