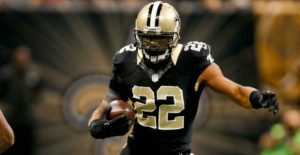 New Orleans Saints running back Mark Ingram’s season is over. The team placed Ingram on injured reserve Wednesday because of a serious shoulder injury, a source informed of the Saints’ according to Ian Rapoport. Ingram rushed for more than 1,100 yards from scrimmage this season.

In a corresponding move the team signed full back Austin Johnson to their active roster. The team also signed running back Bronson Hill to their practice squad.

Hill, 22, signed as an undrafted free agent with the Buffalo Bills after a career at Eastern Michigan. After being waived in September, he had brief stints on the practice squads of the Chicago Bears and Miami Dolphins.

Hill worked out for the Saints last month.