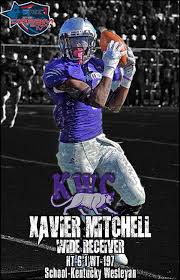 Xavier Mitchell is a good player with great hands

As a football program we have a great relationship with the surrounding schools in the community. Throughout the year we have guys including myself will go around to elementary schools to read books to kids and to tell the importance of education. It’s a great feeling seeing the joy they get out of it, I think we enjoy more than they do sometimes.

I’m from the one and only Clarksville, Tennessee. Both of my parents we in the military for over 20 years a piece so we moved around quite a bit. I was actually born in Germany, we moved around a lot before my fourth grade when we finally settled in Tennessee.

I played sports like basketball and baseball in my neighborhood but the only sport I played on an organized team was football. My dad was a football coach so football was year around for me.

I played quarterback and defensive back my whole life. My first year playing receiver was my senior year in high school. I’m relatively new to the position; I’m still learning new techniques and strategies of the position. I believe I’m just now hitting my stride

I feel like my work ethic by far is the biggest difference between me and most guys. I’m not the biggest, strongest or the fastest guy on the planet but I find a way to get open on a consistent basis due my hard work and technique. I learned that success on Saturdays come from the amount of preparation you put in during the week. From the weight room, film sessions, practice or even the class room everything you do doing the week effects the outcome on Saturdays.

I mostly look for tendencies not so much players but defensive wise. If you know what a team is trying to do to stop you, it’ll be much easier to get open if you know what to look for.

I’m not sure who was the toughest player I faced in college but in high school I would have to say it would have to be Jalen Reeves-Maybin, he was an all-around football player. He’s an authentic Clarksville athlete you can put him almost anywhere on the field and he’ll produce for you. He played Quarterback my senior year he fumbled like two or three snaps but we still ended up losing somehow. He’s currently a stand out linebacker at the University of Tennessee.

I would have to say Jarvis Landry from the Dolphins, he’s the ’s not the fastest guy but he has great hands, runs crisp routes and has great catch ability

I graduated high school 5’7 not even 150 pounds, luckily God has blessed me to grow 7 inches in college. I mean you hardly ever hear stories about people hitting growth spurts after high school. It was challenge adapting to my bodies rapid growth but with time and hard work I put everything together. 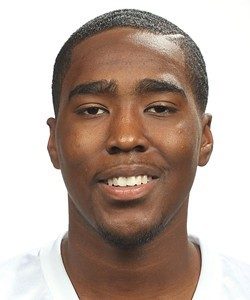 I usually to listen to music from the second I wake up on game day. I try to stay off my phone before the game to try to avoid all of the distractions from the outside world. I would say I listen to J. Cole before I go out to every game. He’s been my favorite artist for long time for because I can actually relate to his music. I don’t listen to it for motivation but to calm my nerves before the game. My mind is usually everywhere before the game listening to his music brings me back down.

Being at all small school doesn’t make the life of a student athlete any easier. In my opinion it makes it extremely more difficult because we don’t have the luxury of having the resources D1 schools have. I remember my freshmen year of college we practiced every day from 9-11 at night because everyone had different class schedules that would interfere with practice during the day. The only way to get everyone to practice was to hold it at night. Some nights you wouldn’t have anything to eat because you didn’t have much money and the cafeteria closed hours ago at 7 o’clock

I would have to say my ability to handle adversity, if I make a bad play or drop a ball I know I’m going to work however times more harder to make up for it and then some. In life you’re going to go through bad times, the true measure of a man is how responds in the face of adversity.

I would have to say I’m an emotional player; I wear my emotions on my sleeves. I’m a passionate football player and it comes out of me a lot. I expect the best from each single one of my teammates because I know they expect from me also.

I’m hard working, humbled all-around football player. I’m a student of the game I’ve been around football as long as I remember. The concept of football always came easy to me I understood offenses and defenses at a very young age. It helps me in my game today, when I line up out there 9/10 I know what the defense is doing, what coverages and who blitzing where. It’s a big part of my game that makes getting open so much easier.

I always been a fan of the Baltimore Ravens even though I’m a offensive player now, there was nothing better than seeing Ray Lewis and Ed Reed command that defense on Sunday afternoons. However, it’ll be a dream come true if I could play with Tom Brady though, I think he’s the best quarterback to ever pick up a football. I feel like Tom and I could be one of the deadly receiver quarterback combinations in the NFL. Especially with all of his receivers getting hurt this year, they could really use the help.

J. Cole would definitely be one because I feel like we have a lot in common. My second option would have to be Alicia Keys, I’ve had a crush on her since I was grade school, she’s the ideal woman. Lastly, I would have to say Tupac he was an inspiration to so many it’ll be an honor to hold a conversation with him.

Man that’s tough my first instinct is saying save it but I’m a huge shoe collector so I think I would have to spend it on a couple pair of shoes, Hopefully one day I could get sponsored so I don’t have to pay for them anymore.