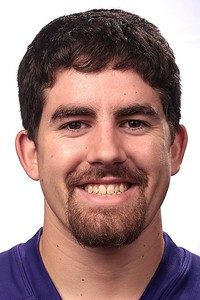 As a team we do a lot of different things that are out in our community. We read to kids at schools and help with community service projects, but the coolest for me would be helping work different booths and games at our newly renovated downtown location while the new look for our panther mascot was unveiled.

The hardest class that have had to take would have to be Concepts to Physical Science.

I am from a little town called Rockport, Indiana, known to the locals as God’s Country haha.

My Role Model would be both of my parents without hesitation. They are the epitome of the way I want to live my life when I have a family.

Yes, I played football, basketball, and baseball so I down time was very little growing up. I was also apart of our State Championship Baseball team in 2011.

I would say my run/pass instincts, and ability to get to the ball in the air.

When I break down film look for receiver and quarterback tendencies. I look to see if there are certain routes that the team likes to run in certain situations during the game. I also look to see if their quarterback has any indications of when he is about to throw the ball, like tapping it before throwing.

The toughest player I have ever faced would probably have to be K.D. Humphries from Murray State. He is a big strong guy that is a duel threat in a hurry up offense.

If I could compare myself to someone in the NFL it would have to be Harrison Smith of the Minnesota Vikings because he is a pretty versatile player who comes up to make tackles but also has the awareness to go be a ball hawk.

The biggest obstacle would have to be my size out of high school. I graduated high school at 5’9 165lbs, So getting college looks were few and far between. Growing up 15 minutes from KWC lead me to a chance to show my work ethic and love for the game. I worked from the bottom of the depth chart as a freshman by working hard, never quitting, and pushing myself to be the best I can be.

My teammate, Cody Mills, and I have our own pre-game ritual dance that we like to do to get our nerves out and our minds ready for the game.

The difference in resources is substantially different from KWC and a D1 program. I remember waking up at 4:30 am everyday to get to practice my sophomore year so that everyone could be a practice before classes start.

My biggest strength is my work ethic and drive to be perfect. I believe that if you are passionate about something then you have to believe that there is nobody out there that will work harder than yourself to obtain it.

My biggest weakness would be that I am not the fastest guy out there, what where I lack in speed I make up for in taking smart steps to stay in position to make a play.

There is not another player that will out work, out grind and be willing to go non-stop to learn the playbook than myself. I will produce.

Tyrann Mathieu would have to be my favorite player. We play the same position and it is amazing to see how relentless he is as he plays. Watching him create and make plays is unbelievable. I have watched all of his highlights multiple times.

The three people I would want to have dinner with would be Tyrann Mathieu, Adam Sandler, and my Spanish teacher in high school Phyillis DeWeese who passed of breast cancer.

My first NFL paycheck would go to my parents. I wouldn’t be where I am today without them. Helping my dad get to where he can hunt and fish whenever he wants would be the best feeling I could ask for.