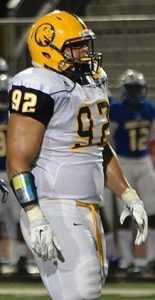 Terrell Clinkscales has an NFL body, and just needs a shot. He has good mobility for a big boy

The coolest thing I have done off the field was going to spend time with kids at the church down in commerce. Just to see them smile and just to know I  can make a impact on a kids life.

I had a couple of tough ones.

My role model is my mom. If it wasn’t for her I wouldn’t be the man I am today. Seeing her work so hard to provide for me and my brother to live better than she did. I would see her get up at 5 am and I wouldn’t see her again to later that night.  She work two jobs tired and would still make sure me and my brother had a meal on the table. She showed me what hard work looks like at an early age. Then she installed it in me and my brother. She works two jobs now my goal is to some day retire my Mom.

I wrestled and high school

What separates me from others is my strength, My explosiveness, my leverage, my knowledge for the game, And my Bullrush! My ability to close gaps I make it hard for a  team to run while I’m upfront.

When I’m breaking down film the first thing I am looking for is how high an OL plays. Next how well are the OL’s hands, does he play his hands high or low are they fast or slow. After that I look for how physical he is. How well does he execute his block. I look to see does he have any give a ways and the pass and run game far as his stance and the last thing is what moves do he lose to and what area does he win in.

I would have to say BJ Finney.

I would have to say Ndamukong Suh  his physicality and how disruptive he is. I enjoyed watching dominate and man handle the man in front of him and that is what I do.

My biggest obstacle was coming out of junior college I had to get so many credits to be eligible for division 1. I dropped out of college and 2012 and fell behind and I did it trying to get a job to take care of my daughter. It was tough times with my family, the coaches at my first school let us get put out on the street so we had to leave. They lied and told the players we would have scholarships. I was thinking in 2012 that I may not play football no more and that my career might be over. I went back to working a 9 to 5 job, but it wasn’t for me. I love the game too much, so I had to come back. My mom and my uncle were on top me so in the beginning of 2013, and that is when I received a call from Coach Callahan at Dodge City Community College in Kansas. He asked me if I wanted to play for them and they had scholarship, dorm rooms and meal plan. I jump right on top of it my I didn’t have any financial aid so my grandfather paid for me to go to school for a semester until I became eligible to get finical aid back. I only had 12 credits when I got there in the summer of 2013. I graduated the summer of 2014 with my 63 credit degree my Associates . I had to grind so hard to get to my dream and that was playing D1 ball.

I feel there are a few, the first one is exposure, but the exposure is getting better. More games on television would really help. I feel we have to overcome the question of if the talent was good or not we were playing and get more shots at showing we can compete with bigger schools. And the last this is not having the same resources as the bigger schools far as taking care of your self.

My physicality, and my ability to play in any defense and adapt to different coaches styles

I’m not sure about weakness but earlier in the season I was engage a little bit to long with blockers. I went in practice and fix that.

I would say I can play anywhere on the D-Line. I  have been and 4 different defenses and 4 years and produce and all of them. I’m smart, humble, and hungry to prove I belong in the NFL.

With your first NFL paycheck what would you do?

Give it to my Mom.