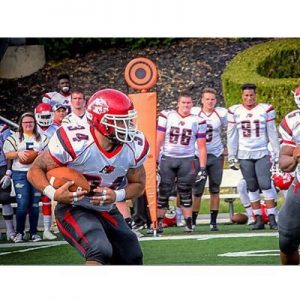 Steven Barroso of Albright College is a hard hitting linebacker.

Started career at Monmouth University, ended it at Albright College

Volunteering with the Children’s specialized Hospital on several Occasions.

My mother. Living in a single parent household growing up with three other brothers, she was able to work three jobs to keep food on our table and also raise us all to be responsible young men. Hardest worker I know and she never complains about it.

Instincts. I have a natural nose for the ball and can read the play quicker than others. This allows me to always be in the right spot at the right time as well as making the play when needed. I also work vigorously on my block destruction techniques so me being able to get off blocks so well helps separate me as well. Another thing that separates me is playing the game with a chip on my shoulder. This makes me work harder, be more aggressive, and give relentless effort. 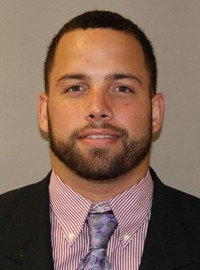 I like to look at several things from each position. When watching QB I look at how he targets his receivers; does he stare down to where he’s throwing or look off, does he look to throw to the sticks for first downs or go deeper. I also look to see if the QB reads blitzes and makes checks. When looking at the O-Line I look to see if they tip off pass or run by the weight they put in their stance. (Leaning forward run- leaning back pass) I also see which lineman are more downhill blockers or positional blockers. When looking at backs I like to see if they are cram to cutback runners, straight downhill, or a bouncing back. Also of course play tendencies on down and distances. I spend a lot of hours in the film room.

Countless players can be named but one for certain was Jordan Brown from Bryant University. (Played against him when I was at Monmouth) Very versatile back who ended up being a finalist for the Walter Payton Award.

Luke Kuechly. Reason being is for his relentless effort and great nose for the ball. He is always right around the play even if he is not the one making it.

Transferring was the biggest obstacle I had to overcome. I went to Monmouth for two years and did well and even was a starter my sophomore year. Then transferred to Illinois State and things didn’t work out how I planned. I decided what was best for family was to move closer to home so I chose Albright. The biggest obstacle was overcoming the regret I had from leaving my first school. They always say the grass is greener on the other side, but it only appears that way. I was able to overcome the regret by just focusing on what I can control and giving my all to Albright to finish my career.

Yes, very superstitious. One of the many things I always do is lay down with a towel over my head an envision myself making plays.

Getting exposure and respect for the level we play at. There’s good competition at every level and I just need an opportunity to prove myself.

Can always be faster.

Let me be the best decision you ever made.