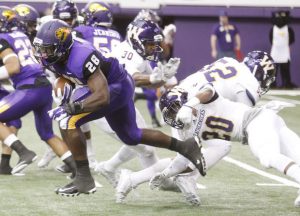 Rutgers and finished at University of Northern Iowa

Impact the youth put letting them know that football is just an outlet, but using football as a way to open doors for you to network and doing community service. Graduating college with two degrees exemplifies that academics come first. Not letting things you cannot control affect you, instead being in control of your academics, character, networking are all aspects you can control that can help you in the real world because football is temporary.

I look up to multiple people my parents, guidance counselor, close family members, and Eric Thomas (motivational speaker) have all helped me get through hard times, helped me remain positive and to understand that its how you respond is what makes you a man.

The complete package can run, block, catch, and the intangibles of being a leader on and off the field. Being a leader on the field and being the one to pick the team up and setting the example separates me from others.

Defensive line tendencies, LB playing on their heels, Safety alignment to see the blitz, who can i exploit on the defense, do the LBs flow hard or shoot gaps

Adrian Peterson, once I get going its hard to stop me, the more carries I get the better I get

Not having the success in college as I would like especially coming out of high school highly recruited. But I continued to work hard, was named captain when I transferred to UNI, I did not let football use me. I hit the books harder, I focused on the things I can control and that was my work ethic, body, nutrition, and coming out of college with two degrees. 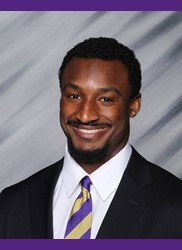 Pray before every game, listen to Eric Thomas

I came from a bigger school, so it is more so proving to myself that I belong at the next level and playing with a chip on my shoulder and understanding that opportunities are precious so making the most out of them.

My leadership and being able to impact my teammates on and off the field.

Being too hard on myself, my biggest critic its a gift and a curse.

I have battled injuries, competing for a starting job, I have tasted success and failure, but the reason why I am here today is because I never gave up hope. I was optimistic about my future and continued to be persistent. I did not let my situation affect my mentally I finished college with two degrees in 4 and 1/2 years, was picked to be a captain at UNI having been there for one year goes to show my work ethic and I will do anything it takes to be the best and represent the organization on and off the field.

Marshall Faulk, and Adrian Peterson and the Eagles.

Nothing really not into buying expensive things, I love fashion but nothing major.