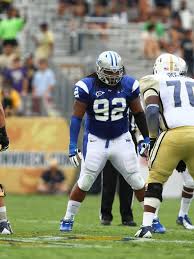 Afternoon tutor at the boys and girls club.

My grandfather, I lost my father at an early age and he was always there as an example for me how to operate as a man.

Yes. Running back and linebacker

Faith. I always believed in you get in what you put out, and I believe in the core values my defensive line coach Tommy West instills in us a players which is practice making plays and in the game it will show up. So by the time Saturday rolls around I don’t feel it’s a lineman in ball who is going to block me all night because we as a front have worked so hard during the week.

Any small keys that the o-linemen might show that gives away what they are doing offensively. That I might be able to play faster because I already know what plays they have the potential of running.

DJ Fluker in high school, the guy was a monstrosity in high school while most of us were just seeing the benefits of puberty. Safe to say we never lost to his team though.

Darnell Dockett. I always liked Dockett as a player, he was a big physical guy who gave great effort on every snap. That’s how I like to view myself. 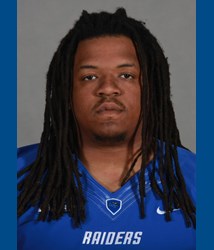 My father was murdered when I was four years old, it was a very adverse time for me and my family but I overcame it with a strong support system in my grandparents and God and this tragic occurrence made the bond I have with my mother and brother an indestructible one.

Prayer. Always prayer then I have a mini concert within my headphones before my coach Rick stockstill calls us up to give us the final war speech before heading to battle.

Exposure, and level of competition. A lot of times with so called small school athletes they say our level of competition is low and they like to see how we perform against big name schools. Anytime we played a big name school I’m always like hey these are the same people we have been playing against since high school, our whole lives even. Also in conferences like the SEC & the BIG 10 their games are always nationally televised, and their players are constantly reported on through our media outlets. So they are more household names than the smaller conference prospects.

Confidence. Not only In myself but in the guy lining up next to me I always know that whatever we have gone through in the off season will always make us able to stick together and overcome adversity in games.

Being a perfectionist, now don’t get me wrong there is nothing wrong with being a perfectionist but sometimes you can’t dwell on a play. You have to always be ready for the next one, so I’ll critique myself real hard on situations on film to keep them from happening in game but off the field sometimes I dwell on them.

He’s a hard worker has NFL talent in his blood and would be an asset to any team with his character.

Ray Lewis and Jerome Bettis were my two favorites to watch growing up. Ray Lewis embodied great character, passion, and leadership on the field and Bettis demonstrated being physical and having purpose when your on the field playing. Bettis was the reason I wore 36 in park ball because we were the steelers and I played running back so I always looked up to big bruisers rather than the shifty finesse backs.

Christ, my father, and Muhammad Ali in his prime. Those three I feel would give me a well rounded dinner table. don’t you?

If I’m blessed enough to have the opportunity, I  would have to say a decent place for my mother to call her own. Since we have been living with my grandparents ever since my father’s passing.