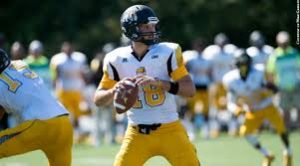 Matt Goggans can make all the NFL throws. I think this kid is a sleeper

Was able to do some community outreach and some meet and greets at both of my schools, it feels good to be able to talk to some of the kids that hope to be in the same position that I am in. To be able to tell them some of the things to avoid and some of the work that is needed to be able to reach the place they want to get to is a great way to give back to the next wave of college athletes.

I got a couple of people I look up too, as a player I would say Kurt Warner just a resilient and dedicated player that was able to accomplish his goals. The other would be Tom Brady, guy is just so competitive and always wants to be perfect, love watching him work. In personal life I was able to be coached by some great people and probably most important one I had was my Father Steve Goggans.

I started out playing football as an offensive lineman and defensive end, sophomore year of high school moved to Tight End and Outside Linebacker, junior year started playing quarterback and been in that spot ever since.

The mental aspect of the game, I feel that I am able to beat the defense even before the play happens with controlling the plays, protecting the run and being able to know what the defense is trying to accomplish play in and play out.

I look for the schemes that the defense is trying to run, once I understand the scheme trying to be run I understand what the offense needs to do to give ourselves the best opportunity to be successful.

Probably would say the toughest I face would have been Gerald Bowman, he was the Strong Safety at LA Pierce JUCO and ended up playing at USC. Very physical player and pretty good athlete. 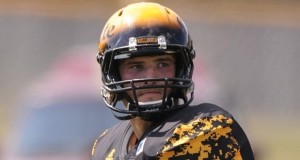 Tom Brady, I would say that because I feel we have very similar physical talents, both of us prefer to work inside the pocket and like to win in the mental part of the game. If it was former players I would say Kurt Warner, he was a very good player for a lot of years.

The toughest obstacles has been a couple of knee injuries that limited my abilities most of my college career. I was able to correct it with surgery and a lot of hours of physical therapy.

I like to go over the play book, call sheet and scouting reports and visualize some of the plays and how we can make the plays explosive.

I think as a small school ball player we don’t get some of the benefits that some major college players are able to have accessible, things like top strength training and nutritional programs. I think the best thing about being a small school football player is that the maturity quickly develops because you don’t have the structure that is often there at the larger schools.

Well if you look at some of the greatest quarterbacks and the most consistently great Quarterbacks in the game play the game with an elevated level of awareness and that come from preparation, they beat teams before the ball is even snapped by understanding defense and what plays and where to get the ball into a playmakers hands the best way possible.

Can’t say I have a favorite player, I am friends, a former roommate and teammate of CJ Anderson so I make sure I stay up to date with what he is doing, for NFL teams I was a big Tampa Bay Buccaneers fan, loved watching John Lynch, Derrick Brooks, Warren Sapp, Mike Alstott and Brad Johnson, they had a great group of guys so deep down still my team but now I love watching good offensive play, regardless of who the team is.

Probably fix up my car.