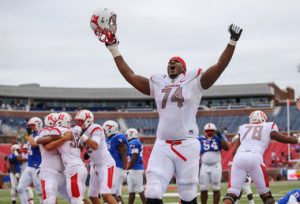 Every summer I return back to my hometown and talk to the local pop warner team about the importance of education and the discipline that sports can give in both.

My father is my role model because he always set a great example as a person and as a family man. He always puts his children and family first, and always looks out for the family’s well-being.

In high school I played DE and some time at TE, but mostly played offensive line.

My athleticism, speed, and understanding of the game.

When breaking down film, I always look for defensive tendencies and any tip offs so I can understand what my defenders doing.

Michael Oher from the Carolina Panthers and I are very comparable because of his physicality and usage of his hands.

One of the biggest obstacles in my life was deciding between playing football or basketball in college. It was a tough decision because it had an effect on the rest of my life and where my path would continue.

I listen to Jersey Club music first to get loose and then to get in the zone I listen to a lot of old school rap music.

My biggest strength is my size and athleticism.

Lumpkin is training with Parabolic Performance and Rehab in New Jersey. Brian Martin the Director is a legend in the industry.

My football knowledge as an offensive lineman, my athleticism with a basketball background, and my character on and off the field would be a great asset for your team. After experiencing a change between 4 offensive coordinators in my five years at college, I can easily adapt to any offensive playbook or situation.