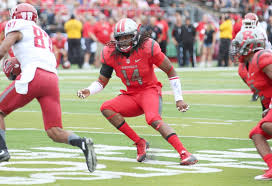 I played three years at the University Of South Carolina playing as a true frosh & starting linebacker as a sophomore. I finished my career at Rutgers University Starting Mike Linebacker the 2015 season.

I really enjoy giving back done countless events in the communities I have visited. My favorite event would be the youth camp I came up with in my hometown where I began playing football. Read about it at the to follow

The hardest classes I have ever taken have to be all of my Graduate school classes by far.

My role model growing up, I would have to say my brother Bilal. He played football and was a better than the player I was. He was just one year older than me but really made me strive to be just as good or better. he recently passed away.

Growing up I played basketball and freshman year of high school I was apart of the track team.

What separates me from others at my position as a player would be my ability to play this game from the neck up and at the same time play with high level of physicality, Also my understanding of knowing I can outwork people in this world. As a physical attribute I would say my eyes are a very good asset to me, I can “see it” very well read my keys and get to the football. My leadership ability I believe is second to none, every where I have been I have become a leader or captain of some sort. I tend to always gain the trust of my teammates. My will to prepare for what is to come is  good, I spend countless hours outside of the required meeting times  in the film room to prepare myself for practice as well as games at both linebacker and special teams.

When breaking down film I am playing the game before the game actually takes place. I play what is called situational football from “drive start” to “rapid change of possession” to 3rd & 2 to 3rd & 5 all the way down to the opposing team taking a knee. Also I study tendencies through different formations and personnel groupings an offense shows through the course of the year. As well as looking at the percentage of passes and ground game. I read guards and tackles stance for pull sets or pass sets.

The tough battle I have had would have to be the games against Todd Gurley of UGA.

My best comparison of myself would be Vontaze Burfict. He and I have similar build and game we are both physical who get down hill. We are both field generals who look  dominate the game. There is a host of other attributes that show our compatibility.

My toughest obstacle in life loss of my brother Bilal.

Kaiwan is training at Parabolic in New Jersey. Brian Martin the Director of Parabolic is one of the best trainers in the country

I do not feel the need to have rituals, I just pray which is something that I do everyday.

My biggest strength would be my high level of intelligence, I use my eyes and I get downhill fast as possible and stop the run with a great physical presence.

The weakness in my game has been my pass rushing, I have gotten a l in coverage but would like to rush the passer a bit better.

If I could sale myself to an NFL GM, I’d tell them what a great person they are getting who has never had any off the field troubles and has worked to gain his degree in just three flat years and already working towards a masters. I would tell them what type of player I am and how I could benefit the organization in more ways than one. Not only am I a great linebacker but I have  ton of experience on special teams and could play on all of them at the NFL level. In the end I believe we are all after the same goal, which is a Super Bowl ring and that is what I will come in and work for.

Growing up I was a fan of William Green, he was from the same neighborhood I grew up in. Seeing him at the level made me feel like I could do it as well.

If I could have dinner with three people it would be Bilal Salaam, Qua’Shawn Jones, and Marget Prescott.

The first thing I’d buy with my money would be a head stone for my grandmother and something beneficial to my older brother.