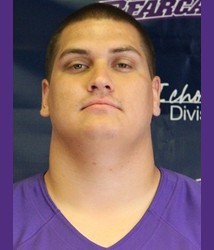 I mainly play Nose Tackle but I rotate between nose and 3 technique.

The coolest thing I have done off the field was help coach my younger brother’s little league team a few years ago. I also had the opportunity to give back to the community at my university through several community service opportunities.

I have two role models. First would be my dad. He helped guide me into becoming the man I am today on and off the field. He showed me what it meant to be a father, a husband, and a productive member of the society. He also gave me a strong foundation in sports. He always encouraged me to finish and to never quit no matter the task. Second would be my Grandpa Toby. He was my weekend getaway growing up. He was the one who brought football into my life. He was at every one of my games from little league through high school. He was always in my corner pushing to be the best I can be.

Did you play any other sport growing up?

Yes, I was a defensive end and offensive guard in high school.

I would say my football IQ combined with my strength and my motor separates me from the others. I watch endless hours of film to prepare for my opponents and pride myself on being able to sniff out a play before the ball is snapped. My size and strength allows me to absorb blocks to free up backers, but I know how and when to get off the block and make the play.

I look for small tendencies that give away plays. Such as their hand placement pre-snap that matches pass plays or run plays, their two point to three point stance tendency, and any form of body leaning. I also use the scouting reports to match their formation to their plays types. I make a defensive call for each play and map it out in my head where to position myself in a game situation.

I would have to go with the three interior offensive lineman at the University of Indy.

I would say I’m like Vince Wilfork. Big, strong, and always establishing a new line of scrimmage.

The biggest obstacle I have had to overcome in my life would be getting back to where I belonged after leaving the game of football and college for a year and a half. After my sophomore year of college football, I left Southwest Baptist University to be back with my family. My wife and I became regular workers, and for the first time in my life had to be in the real world away from football. In that year in a half I lost my best friend and my uncle. Before they passed, my best friend and uncle told me how they wished I never left my college career. I knew I wanted to play again, but didn’t know how. I wanted to finish where I started, and luckily for me, SBU’s new defensive coordinator had all of his chips on me. I returned to football in 2014 close to the worst shape of my life, but through hard work and perseverance I was able to finish my career in the best shape of my life along with the best season of my career.

I have one ritual. I sit in my locker, turn on my game day playlist, close my eyes and picture how the game is going to go.

I believe I have to overcome proving to scouts that I can compete at the next level and not just at the D2 level.

My biggest strength is my mentality. I believe I can’t be blocked on the field. I believe I will make every play that comes my way, and even those that don’t. I believe I am the best. My mentality gives me that edge I need to dominate.

My biggest weakness would be my mentality as well. The nose position isn’t always the prettiest. Sometime you just have to take on double and triple teams and let your backers make the tackle. Sometimes I get too caught up in stopping the play that I ditch those blocks too soon and allow opportunities for a play to happen.

I would say that I am a dominant player who has the size, the strength, and the IQ to play at the next level. All I need is a chance to prove it to you. I also know what it’s like to live without the game of football, and I know I’m not ready to go back to that life. I am a family man who has his family behind him ready to work and grind to get to where we want to be.

Before the Houston Texans became a franchise, I was a Brian Urlacher, Chicago Bears fan.

If you could have dinner with three people dead or alive who would you chose?

My best friend Matthew Sepulveda, my Grandpa Toby, and my Uncle Eddie.

I would pay off my student loans.