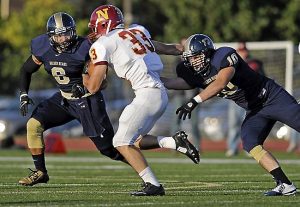 Jordan Halverson of Concordia St. Paul is a very good tackler that get’s the job done

While I was student teaching I started a mentor program at the school for young boys. I was someone that they could relate to.

Hardest class would have to be my Psychology classes I had to take.

My role model is my mother. She is a single parent that raised 5 children. She is a very strong woman, and has made me the man I am today. I know as a mother raising a boy into a man by herself is challenging.

In my younger years I also played running back and safety. Some other position I played due to game planning in college were Defensive end/OLB.

My nose for the ball, athleticism and physicality separates me from other linebackers. 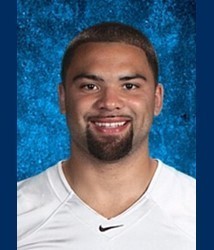 I look for tendency from the QB, skill players, and O-line. I like to see certain hand motion while checking in and out of plays. I like to see how an O-line run blocks and how they pass set. Also like to see as a whole what are the other teams tendencies on certain down and distances.

There are a lot of great players in the NSIC. It is very hard to just name one player, but I would give it to the whole O-line from Mankato State my junior year.

Bobby Wagner. I compare myself to him a lot. We both can run sideline to sideline making plays, and come downhill and stop the run. We both are built very similar, and play the game with a lot of passion. Also we both are very athletic to stop the run game and cover in the pass game.

I would have to say being homeless at times throughout high school. It was a rough part of my life, but made me stronger and more grateful for a lot of things.

I would say doing my prayers and listening to music.

I would say my athleticism and my knowledge of the game would be my biggest strength.

I would say my weakness would be my height. Being 6’1 I’m not going to be the tallest LB.

I would tell him that I am a very hungry and ambitious player. Just a kid that needs one opportunity and that he wouldn’t regret it.

Favorite player growing up was Ray Lewis, and favorite team would be the Minnesota Vikings.

Ray Lewis, Mohammed Ali, and my really good friends that passed away in high school (E-Man)

With my first NFL check I would go out and buy myself a burger to celebrate all the hard work that went into that first check.