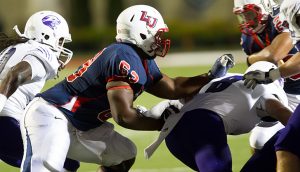 On Halloween every year we get some volunteers from every team, and we go out and instead of collecting candy we collect food to donate to the Daily Bread to feed those in need. Seeing everyone’s reaction when a football player comes to their door on Halloween is always fun, and being able to give back of course.

Philosophy was by far the hardest class I’ve had to take .

My parents are my biggest role models in my life, they’ve pushed me and encouraged me to get where I am now. As well as my grandfather, who is a very hard worker, he’s someone I’ve always admired for working a lot with no complaints.

I played defensive line as well in high school

My ability to use my hands effectively, while moving my feet in pass protection is my biggest strengths an offensive lineman. Also being able to pull and get on corners, safeties, and linebackers.

The main thing I’m looking for are tendencies in each lineman to know what pass rush moves to be ready for. I also look for what alignments that the defensive line will get into when they are going to bring an internal blitz or twist, do they like to twists on third downs, and linebacker alignments.

There are a few. My first game of my college career I had to go against Roosevelt Nix, who now plays for the Pittsburgh Steelers he was one of the fastest interior defensive lineman I’ve seen to this day. O.J. Mau was also another guy, he’s pretty strong and plays well with his hands.

In high school I found out about a sight called Virginia preps, and I began looking at high school offensive lineman highlights. I came across Morgan Moses out of UVA who now plays for the Washington Redskins. I never seen someone maul somebody and finish every block that was before. Afterwards going into my senior year I began trying to take that effort level into every game that I play. His high school highlight is still the best one in my opinion I’ve seen still to this day.

When I was let go from the team at Liberty University, when I initially walked on was probably one of the the roughest time for me mentally. I’ve never been out of a sport before and I struggled for those few months before finding motivation outside of a sport, and I knew I had so much more to offer and just needed a chance to develop and show it. I overcame it by coming back on the team again the next semester and getting to the point I’m in now.

No rituals, I mainly just keep a level head, I don’t get to hyper before a game I’m around laughing,talking, listening to music before a game to keep myself relaxed, and just execute the way I was taught.

Just proving that just because I’m not from an FBS school, that I can play at a high level.

My ability to use my hands effectively, and be able to improvise if a look we get on the play isn’t exactly how we’ve been practicing finding a way to get the job done anyways.

Playing at full speed if I’m hesitant with an assignment at the last second. So I always prepare as much as I can to prevent that.