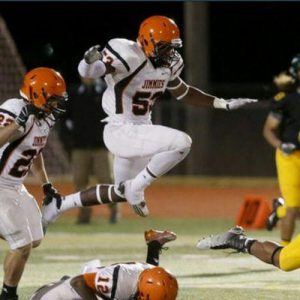 Jarelle Miller moves very well for a bigger inside linebacker. He hits hard as well.

I’ve done many things as in running sports camps for the youth, helping out with catering for the city but the coolest thing I must say when me and my family feed the homeless for Christmas back in 2011.

Accounting 1 and 2 is most definitely the hardest.

I have two role models one is my mother she’s a woman of God. Without the sacrifices she made for the 7 of us and the prayers I wouldn’t made it this far. The obstacles she had to overcome it’s truly a blessing that she is still living. I watched her fight for her life when she had brain surgery last year but no matter what struggles we went through in life she always stayed strong. The second person is my childhood friend Hasean (Ha-Ha) Clinton Dix he showed me a lot of things no matter where you’re from and no matter what you been through in life, if you put your mind to it and keep God first you can never lose and I learned that from him.

Yes, I played full back in high school.

As an inside linebacker what separates me is the athleticism I have. I can move sideline to sideline I move pretty well for my size and weight.

As a linebacker I watch the o-line mostly the guards wherever they are heading too that’s where the play is going most of the time.

I would say Derek Elliot from Valley City.

I would compare myself to Clay Matthews I say this because he is one of a kind he play aggressive and fast just like me.

The biggest obstacle is growing up in Orlando, FL being the first one from my family to go to college and receive a college degree. Where I was raised at the good die young there’s not too many people that make it out and go chase their dreams I thank God for allowing me to do this. I overcome this obstacle by following Gods plan it was all him I just followed.

I just pray and talk to God before the game.

I have to overcome many obstacles such as being able to compete with other guys from bigger schools. I know I have to work harder and sell myself so scouts will see that I have the ability to hang with big school players.

My biggest strength is being able to adapt to any situation and making something out of nothing rather if its football or not.

I would say being vocal as a linebacker I need to talk more to the people next to me and the people behind me.

I am a person that’s going hard for God, my family and me. I know it’s not easy but the fast way doesn’t last long and I know it’ll be worth it.

Ray Lewis, the Rock and my Grandad that passed away.

I would buy my Mother the house she always wanted!