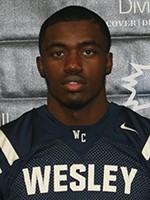 Business stats, finished with an A but it was stressful

Played basketball,baseball but my other main sport was track

Versatility and not afraid of being in the box

Tips from offensive line or WR alignment to recognize play pre-snap..the strengths of opponents and their style of play

I don’t know about the toughest; I have came across some good players, but my freshman year Shepherd University had a good WR core

Getting back into school, I remember emailing 30 different schools at least 2 coach per a school. Highly interested in my film but scared to take the risk due to my circumstances. I overcame that by keeping faith and not giving up until I got into the right school for me

Yes, watching Patrick Peterson “All of the lights” and Tyrann Mathieu “Moves like badger” highlights on YouTube

The lack of exposure, competition level and size

Nose for the ball, Speed and physicality

I’m a athlete that’s willing to do whatever it takes to win,help out the team and a hard worker that’s dedicated just need an opportunity.

Family would be so cliche so, Deion Sanders, Jay-Z and Kobe Bryant

Get my parents out of that apartment